The Ghosts of Bosnia

Ratko Mladic has now been given a month to read up and prepare to respond to the charges against him, ranging from murder to genocide. As might have been expected, he fulminated against the legitimacy of the court and refused to comment on the charge sheet. Instead, the former military commander of Bosnian Serb nationalists choose to glare and gesticulate obscenely in the direction of the bereaved relatives of just some of the tens of thousands of predominantly Muslim civilians slaughtered during the war of 1992 - 1995, when Serb rebels, armed by Serbia proper, tried to secede from the Bosnia-Hercegovinan state by force and "ethnic cleansing".

With the passage of time, the West has nearly forgotten what happened - not that it did much to acknowledge the slaughter on the European Union's doorstep whilst it was going on. As blogged previously, Europe not only did nothing but, by means of an arms blockade against both sides, it ensured that the Serbs continued to have a massive inbuilt advantage, supplied as they were by the remnants of the Yugoslav Federal Army. Led by Britain, Europe repeatedly denied American pressure to intervene with UK Foreign Secretary Douglas Hurd and Britain's Balkans envoy Lord David Owen (who memorably and pompously told Sarajevans,"Don't, don't don't live under this dream that the West is going to come and solve this problem. Don't dream dreams.") both utterly adamant that Sarajevo should be abandoned to its fate. (Hurd was to go on to make a large quantity of money helping the Serb Government privatise its communications industry). At best the conflict was deemed simply too confusing for western Europeans to be bothered to follow or, at worst, the Bosnian Muslims, the largest group in Bosnia, were portrayed as eastern interlopers, ready to remake Saudi Arabia in the Balkan hills, when nothing could have been further from the truth.

A few weeks ago, as Mladic was heading to the Hague, yet another mass grave was found in Bosnia. And yet again, the people in it were Muslims.

And this is the thing: looking at the one hundred thousand people confirmed dead, the overwhelming majority were Muslim Bosniacs - especially among the civilian dead, where Muslims account for nearly 85% of deaths. And looking at a map of where mass graves have been found, they are exclusively in the territories that were under the Serb rebels' control through the war. It is hardly surprising then, that these crimes against humanity, which took place a short journey from the holiday beaches of north Italy, served to radicalise many of the younger western Muslims who ended up fighting and bombing for al-Qaeda. It does not excuse terrorism, but it certainly explains it. 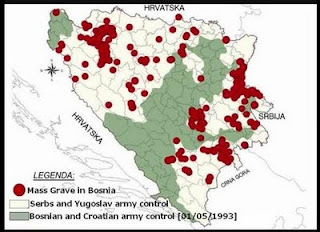 By contrast, in Bosnia itself, the Arab fighters who turned up to help the Muslims were treated with suspicion and in the main were eventually asked to leave. Although Saudi development money was sent to the country after the conflict (with mosques reportedly prioritised over any other reconstruction work in spite of the plight of local people), the Muslim Bosniacs were and remain far from the zealous fundamentalists they were portrayed as by both the Serbs and elements of the western media.

Not that it should have mattered, but, in truth, most defenders of Bosnia were casually religious until the attacks on them because of their faith inevitably sharpened their identity as Muslims. For centuries, they had lived alongside ethnically-identical Catholic, Orthodox and Jewish communities, gradually intermarrying. The Communist era saw many of all backgrounds turn to agnosticism and atheism. After hosting the 1984 Winter Olympics, Sarajevo became an international city, with, for example, none of the hallmarks in women's dress of Riyadh. Even during the siege of the city by the Christian Serbs, a monstrous three-year long affair, its young people continued to hold rock concerts, film shows and beauty parades - the latter melancholically celebrated in the U2 song, "Miss Sarajevo", and which ended with the contestants poignantly parading a banner pleading to the World; "Don't let them kill us." Asked by CNN what she would do with her year as Miss Sarajevo, the winner, Inela Nogic, reflecting the reality of life in her city, replied, "I don't have any plans. I could be dead tomorrow."

Our past defines us; how we got where we are and became who we are. As with all nations, Britain likes to choose the good bits - fighting Hitler, inventing penicillin and building the first railway. But as with all nations, we have acted questionably and wrongly many, many times. Avoiding these, ignoring the lessons or closing our eyes to our national culpability do nothing to help shape a safe and secure future.

So as these shrivelled bodies are exhumed from their unmarked graves, their violent endings evident from the remains, don't turn away. Don't pretend it was nothing to do with us or that it is somehow all in the past. The xenophobia and racism that manifested itself in these hills and valleys exists still in every country in the world, ready to burst out like poisonous buds as soon as the conditions are right. If we close our eyes to the past, we end up blind to the future too.