Book Review: "The Rise of the Green Left" by Derek Wall 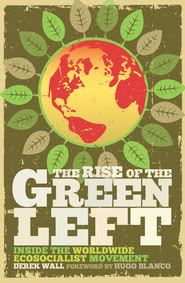 Derek Wall is a former Speaker of the Green Party of England & Wales and a key proponent of the growing ecosocialist movement which is the subject of his book, "The Rise of the Green Left". He teaches political economy, but this is no dry academic text riddled with political theory. Rather, it is a cri de coeur, with a vital analysis of the problems confronting the planet as untrammelled capitalism hungrily gobbles up our biosphere, spreading the poisonous profits it generates so unequally that billions either go hungry or compliantly join in the rape and destruction of our living space, buying into the lie that their hard work will eventually be rewarded.

Derek Wall contrasts the long term sustainability of the shared Commons, written about extensively by Elinor Ostrom, with the inherent need for capitalism to create goods which become obsolete sooner and sooner, either via technical breakdown or aspirational shifts in fashion. The corollary is the burgeoning waste of resources even at a time of rapidly increasing resource scarcity - something which does not alarm capitalism given that it thrives on scarcity.  Capitalism is driven by a mechanism that ignores morality - even superficially "green" initiatives such as growing biofuels for American and European cars in Colombia are shown to have involved armed gangs torturing and murdering local farmers into selling their lands so that traditional, sustainable pastures could be destroyed and replaced with alien, but profitable, biofuel crops. There are echoes here of Joel Bakan's psychological diagnosis of corporate capitalism as essentially psychopathic.

The Commons approach of sharing, in sharp comparison, reduces waste massively and conserves resources, encouraging a socio-economic system based on co-operation and sufficiency as opposed to competition and endless growth. Viewing people as part of Nature rather than either somehow apart from or in dominion over it, ecosocialism seeks to synthesise the most vital aspects of both ecology and socialism, with the inextricable symbiosis between social justice and environmental sustainability emphasised and illustrated again and again.

This is an important document for anyone interested in how green politics can deliver a truly different society and provide an answer to the claim that there is no alternative to capitalism. It challenges socialists to consider the need for sustainability in their thinking about social change. And it challenges the green movement, positing the need for a more coherent ideological narrative to underpin the authentic concerns of many of those involved. Greens who argue for individual or local action alone miss the point that, for example, even if every American citizen took every step argued for by Al Gore in his Inconvenient Truth film, this would achieve barely a third of the required reduction in US carbon emissions. "Lifestyle change is not enough; deeper structural change is needed."

Collective, worldwide action is vital - this timely, highly readable and usefully engaging tome sets out some of the paths we can take towards a far happier world. Tracing the thinking behind a sustainable and just human society back as far as Marx and Engels, the book charts the progress of ecosocialism to date. Latin America is a particular example to the world; but the book also looks at developments elsewhere, including the rise of ecosocialism within green and left political parties like Die Linke in Germany, and the establishment of the global Ecosocialist International Network. It highlights practical soldairty between movements in different parts of the world, such as combined action between Peruvian trade unions and British climate change activists following the Bagua massacre in 2009.

Derek Wall argues for an inclusive approach, embracing a diverse range of strategies and tactics and a wide range of thinking. The leap from where we are now to where we need to be is substantial, and so a welcome segment of the book covers possible transitional steps, such as progressive mutualisation of the economy, land reform and conversion of military production to peaceful and renewable purposes. He explicitly rejects the narrow dogmatic purity that so often stymies the Left, though equally cautions that political parties and individuals within them risk being seduced by power and so absorbed into the mainstream, neutralising their capacity to effect real change. Constant self-challenge and renewal within radical movements are important in order to effectively tackle wider societal issues.

With a global reach, it is an urgent but optimistic manifesto for positive ecosocialist change. The final chapter sets out a range of resources and channels, worldwide, providing a practical basis for ecosocialist action that can really work for planet and people. Essential reading for anyone who wants to work for a new world.

The Rise of the Green Left - Inside the Worldwide Ecosocialist Movement