Limits to Growth = Limits to Wealth 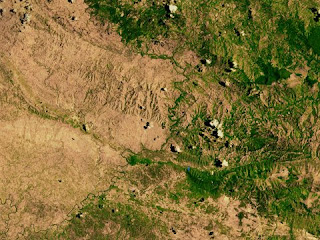 (Right -The Desert of Capitalism: on the left in this satellite picture is Haiti, whose Government has permitted full-scale exploitation of the forests by big business. On the right, the Government of the Dominican republic has poured public funds into Eco-tourism and conservation - the results are plain to see.)

The mainstream of politics often combines its reluctant nod to the need for environmental protection with a hasty assurance that capitalism can yet deliver "green growth". Like latter day alchemists, they claim a synthesis of the free market with modern technology, and a healthy dose of genetic engineering for good measure, will somehow deliver a nirvana of never-ending increases in production and consumption and, of course, profit in a sustainable way.

This, of course, is the underlying folly of capitalism - that limitless demand can somehow be met ultimately with limitless supply. In any other realm of human activity, under any other title, the concept would be laughed out as fantasy at best, dangerous delusions at worst. But for our planet, its species mired in an unchallenged liberal economy now for over twenty years, if not much longer, capitalism is as essential as the air we breathe (or even more essential, given the damage capitalism is permitted to inflict on our air). Since Fukyama declared the end of history with the fall of the Berlin Wall, we have been left with a received wisdom and socio-political consensus that there is only one way forward: free markets, deregulated as far as possible. And through the 1990s and the start of this decade, enough crumbs fell to enough people from the Masters' tables to maintain the illusion that somehow everyone would benefit. The suffering of hundreds of millions of the poorest in all societies, their poverty - both relative and absolute - was effectively shut out of the media as effectively as the thousands of "gated communities" that have sprung up throughout the western world have physically shut out the offending sight of poor from the eyes of the rich.

Of course, we now see this Neverland unravelling before our eyes with the banking crisis and the recession. But how has it been dealt with? After all the wringing of hands, the denunciation of "greedy" bankers (as if somehow there were some who were not) and the declaration that such things could never be allowed to happen again, what do we find? A handful of bankers have departed their well-paid jobs, in nearly all cases with handsome pay offs and swollen pension pots. Even Fred Goodwin, who captained the Royal Bank to ruin, continues to pick up a pension of £342,500 plus pa, along with a seven figure lump sum, while 9,000 of his former employees have lost their jobs. At least he will be able to get the scratches on his car fixed. His worst penalty? "Blackballed" allegedly by the membership committee of Saint Andrews Golf Club - now that's capital regulating itself!

Now this past week, we are told the bankers are now returning to their old habits. Kept afloat with the hard earned money of taxpayers, after spending years themselves doing their utmost to avoid paying their personal income tax and their organisations' corporate taxes, they now feel ready to carry on as normal.

No surprise. The capitalist system has an inherent driver - it is to maximise your return for the minimum investment of effort: You want something I have. My intention becomes to find what is the absolute greatest level of value that you will surrender to me for it. There are no ethical considerations. No long term planning. No morality other than how do I extract the most wealth from you, for me. Now.

So it is little wonder that, with some signs the current downturn has flattened out, that capitalists seek to assert their normal behaviours. They have always done so in the past - why would they not now? It is, we are told, the "natural" way of doing things, so why would their nature suddenly change?
http://www.independent.co.uk/news/business/news/banks-are-forgetting-lessons-of-crisis-already-warns-turner-1716001.html

The corollary of all this though is that the concept of a "return to normal" IS unrealistic - the imbalance in wealth, globally and in the UK, is at a historic high. The gap between rich and poor has never been wider. Tiny numbers of people hold vast quantities of wealth while resources grow tight and environmental degradation impoverishes hundreds of millions - both developments driven by the voracious need of capitalism to feed the pockets of shareholders rather than the bellies of hungry children.
http://www.guardian.co.uk/money/2008/aug/04/workandcareers.executivesalaries

It is not sustainable, which is why a return to normal ways can only be a temporary phenomenon. Capitalism is driving the planet and our species to the edge. Any recovery may last a while - a year, two years, a decade even, but soon enough, the impact of passing not just peak oil but peak carbon fuel production will kick in with a thump that will bring whole economies crashing down, banks and governments with them, and social unrest, disorder, violence and war may well be the most obvious result.
http://www.guardian.co.uk/commentisfree/2008/aug/08/kingsnorthclimatecamp.climatechange
There is another future: a Green one, offering redistribution of wealth, fairer societies, banks and enterprises focussed on mutual protection and community need rather than shareholder dividends and private profit. A sustainable future that has plans for the next 50 and 100 years, not the next 3 to 5 years which fit the common corporate business plans of most capitalist companies. This way recognises that there are limits to growth, there is only so much that can be extracted without needing to replenish. And this in turn leads to the point that if there are limits to growth, there need also to be limits to wealth: that a sustainable society seeking the common good has, by virtue our human condition and our planet's limits, to set a maximum level of wealth that an individual can hold, in income and in wealth. Any other way can only lead to the chaos and collapse of the capitalist scenario.

We face a choice: green and growth cannot be intertwined indefinitely; we need to learn that there are limits - to what we can have, to what we can take. Instead, we have to find how we can do more with what we have - and all the evidence points to those people who already do so have happier and healthier lives than those who are tied in, emotionally, psychologically, financial and physically, to the capitalist treadmill. If this can be translated to the whole community, if it can become the zeitgeist, the underpinning ethic of society, a transformation can begin - but it will involve hard choices and political action.

It won't be an easy option or a soft choice: I am not arguing for a touchy-feely hippy revolution.

But I AM arguing for a revolution.
Posted by Viridis Lumen at 12:16 1 comments

Global Warming: they just don't get it.

The Environment Secretary, Hilary Benn, warned this week that climate change will affect all our lives after a report stating a two degree rise in average temperature by 2040 is now unavoidable, and it could be up to eight degrees by 2080.

We are then told to plan and build better flood defences.
http://www.guardian.co.uk/environment/2009/jun/18/climate-change-report

Read Mark Lynas' book "Six Degrees" and you will see there a grimly sober, well-sourced assessment that by six degrees, there will be nothing left to defend from rising seas.
http://www.marklynas.org/2007/2/3/our-final-warning-degree-by-degree

A six degree increase across the planet will extinguish life as we know it: apart from in the polar regions (possibly not even there), the ecosystem that human and most forms of animal life depend on will have collapsed and the atmosphere will be barely breathable.

It may seem a huge change for a relatively small increase in temperature, but the biosphere that sustains life is thin in the extreme - not only is it a tiny layer between the planet and outer space; it is also sustained by an extremely precarious balance in nature. It has been disturbed naturally in the past, though the changes then have nearly always been over centuries and millenia, not the decades of the current changes.

We have it in our gift to avoid this: but if we don't change, if we don't move to a fairer society based on local, sustainable production and moderate our consumption, we face the prospect of making this the final century not only of our civilisation, but of our very species.

Mr Benn needs to think about more than flood defences.
Posted by Viridis Lumen at 15:33 0 comments