Corbyn and the EU: the Clock is Ticking 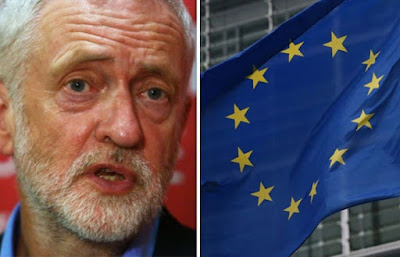 The last week has seen the fissures in the Conservative Party rent open for all to see more clearly than ever. With Cabinet Ministers falling like nine-pins in what can only be assumed were well-rehearsed tantrums (even the man who wrote the deal was among those who denounced it and resigned!), Theresa May's Coalition of the Damned seemed on the brink of collapse. Opponents inside and outside ranks circled like vultures over an bloodied prairie dog, while the media salivated over a fresh delivery of meat for their 24 hour newsfeast. Even Labour's Jeremy Corbyn mused that he could muster a little sympathy for the Prime Minister on a personal level - though someone might remind Gentle Jezzer that she was of course the Home Secretary who led on inventing the "hostile environment" for migrants, so any empathy might be better directed elsewhere.

Yet, while May is on the ropes and anyone watching must wonder what she does get out of it for herself, the fact is that she will almost certainly still be PM in 6 months time (just) and the Tories will still be in Government with their DUP Orcs snapping loudly but loyal on the benches behind them. The Tories are masters of survival and this time is no exception - their incumbency entrenched by Nick Clegg's typically short-sighted Fixed-Term Parliaments Act, which means that over 100 Tory turkeys would need to vote for Christmas before there can be a new General Election this side of 2022.

We hear that five Government Ministers - yes, there are still that many left - led by the weasel-minded Michael Gove are sticking with Theresa May to persuade her to amend the deal. This would entail both May and the EU being prepared to renegotiate, which is unlikely in both camps. So that leaves two scenarios: either one where the Rees-Moggs and Boris Johnsons suddenly fall into line, which will simply not happen; or, more likely, the deal is scrapped and the Tories and DUP unite around a situation where May signs up to numerous piecemeal arrangements for things like customs checks and air travel before a"Hard Brexit" at the end of March 2019.

This will not be the apocalypse that so many Hard Remainers claim: we will not fall back to eating grass flavoured with the last packets of stockpiled bisto, though without question there will be many administrative problems and disruption especially to transport for several weeks or months.

What we will have is a Conservative regime though that will use the chaos to enact all manner of contingency legislation and regulations to dismantle a swathe of employment and consumer rights, privatise yet more or the state and possibly repress some of its opponents in the name of National Unity. May, her job done (she will say) will resign in May and Gove's hour will arrive.

There is, in the next few weeks, a wide open chance for Jeremy Corbyn and Labour to drive not just a wedge between the Tories, but a stake into the heart of the Government. It would involve neither a General Election nor a second referendum.

What if Keir Starmer were to announce that, on reflection, while May's Deal doesn't meet Labour's six tests, the party recognises that, in the short time left, it is the best deal available and the only one that will both honour the referendum result and afford some protection to workers and consumers?

Doing this, rescuing May's deal, possibly with a few amendments, would leave the Prime Minister prisoner of Labour and drive Mogg and co out either to foment ceaseless rebellion within the Tories or alternatively to the netherworld of UKIP - whose own revival, now gaining some traction in the polls where they are back in third place though on just 8%, would also be spiked. May might linger on longer at Downing Street, but her government would be paralysed and the time would come when even she would know the game was up and support an early General Election. Labour would be in pole-position to dictate the terms of the ongoing negotiations for our new trading relationship with the EU (bear in mind that the current deal is only about how we leave, not the future arrangements) and by reaching out across the political divide would be seen a force for unity in this divisive time.

Politics is the art of the possible. And while all acts should always be guided by deep-rooted principle, much of the hot air of the last few days has not been for the sake of beliefs and ideals, but simply jostling for personal and/or party gain at what is one of the most critical moments for the UK since we joined the EEC back in 1973.

The electorate, on the other hand, seek simply a settlement: for now, none of the uncompromising politicians parading before the cameras this last week are likely to have infused anyone with what is needed above all - hope. Corbyn alone has the chance to do so, but the clock is ticking.
Posted by Viridis Lumen at 11:40 0 comments