"If You Don't Have Tears In Your Eyes, You Will Cry In Your Heart." 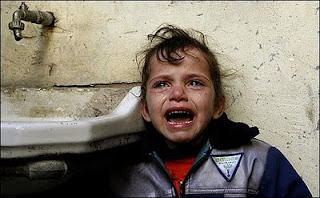 These poignant words will stay with me until the day I die, not least because the girl who spoke them is just ten years old - a Palestinian in Gaza interviewed on tonight's "Panorama" programme on BBC1. She had just shown a picture - a drawing in typical child's form, stick figures drawn with crayons - "This is my Mum when the missile cut her in half." "This is my brother holding his baby son...his brains were dripping out." She said she still hoped to have a life, or at least half a life, but she was finding it hard to believe both her parents were dead.

This appeared to be a belated attempt by the BBC to right their bias in their reporting of the war against Gaza, as well as their bizarre refusal to broadcast a humanitarian appeal a couple of weeks ago in case they were seen to be anti-Israeli. Here, their reporter, Jeremy Bowen, did go out of his way to show that many many homes of Palestinians had been bombed and even susbequently flattened by Israeli bulldozers with the dead unburied still inside, entombed in their homes. And he did point out as he stood among the rubble that each pile represented someone's home or business and was unlikely to do anything but increase hatred and antagonism towards Israel.

He interviewed International Red Cross representatives who said that, in contravention of international law, Israeli Defence Force (IDF) soldiers had denied them access to the injured for 2 days and there was no evidence that they had treated anyone themsleves as they are expected to do. One boy of 15 was interviewed, his eyes bleak with despair, as he explained how he had sat with the corpse of his mother, his own legs shattered and unable to walk, while his brother slowly bled to death a few feet away.

This, we were then told by the Israeli Government spokesman, was done to stop terrorism and if people suffered it was the fault of Hamas, not the IDF weapons that rained down on Gaza. They had warned civilians to get out of areas due to be attacked he insisted - and of course claimed they only attacked buldings where Hamas fighters or weapons were.

But Gaza is a tiny, cramped place - 1.6 million people in an area smaller than the Isle of Wight - so where were these people supposed to flee to? With both Israel and Egypt keeping the tiny territory sealed, anyone inside was effectively trapped and at the mercy of what was clearly pretty indiscriminate firing by the IDF.

Bowen did not point this out, however. Just as he also failed to point out that Hamas fighters inevitably were in the streets of Gaza - because where else could they be? No modern war is fought on some neat, open battlefield like Waterloo or El Alamein. Gaza was more like Stalingrad - so if we eulogise, rightly, the Soviets who defended the ruins of that city house by house, why was it so wrong or surprising that Hamas fighters, the only army that the Gazans have, defended their city when it was attacked by fighting in that city?

Film was shown of white phosphoros shells falling on Al-Quds hospital, again in contravention of international law - by which hospitals are never to be attacked. Bowen did mention that the use of white phosphoros is illegal "in some circumstances" - he did not specify that its use in civilian areas (like hospitals) is one such; nor, more importantly, that when the first reports of its use emerged during the attack, Israel flatly denied it.

The BBC remains guilty alongside much of the rest of the international media of grossly misreporting this war. It continued even tonight to equate the puny attacks of the Hamas rockets which killed 4 Israelis to the assault of the IDF which killed 1400 Palestinians. They left unchallenged the Israeli claim that nearly all the 1400 were "Hamas terrorists", when at least 600 were children and many more were women and male civilians.

Israel will tomorrow almost certainly elect its most extreme rightwing Government in history. In pole position is likely to be a party committed to expelling the remaining Israeli Arab citizens, completing the ethnic cleansing which began in 1948, when hundreds of thousands were driven out of Israel into Gaza, which now exists as a huge, permanent refugee camp.

President Obama has early on indicated that he believes Israel has a right to expand its borders - as indeed Israel's constitution allows for, a unique position in world constitutions - and has ruled out talking to Hamas. Like the BBC, he seems to ignore the unassailable fact that Hamas is the democratically elected Palestinian government which came to power in multi-party elections - instead, like Bush before him, he is already signalling he will deal instead with the electorally defeated and discredited PLO-Fatah.

How would it be if the world had ignored Obama's election and was treating John McCain as the real President of the USA? How does he expect Hamas to respond? And how does he, and Israel, expect the people of Gaza to respond? Looking into the empty, grief-struck eyes of the traumatised children of Gaza, have they not simply created a new generation of grievance, a next generation of suicide bombers and budding rocketeers?

It is common in the West to see Israel as "like us" and the Arabs as "the Other". Yet the Palestinians we saw tonight were striking in that their world, their lives and homes, their aspirations were so like ours - the doctor who mourned his four teenage daughters, one of whom had hoped to follow him as a doctor and another studying to be a journalist; on the wall of their destroyed bedroom, next to the splattered brains of another dead daughter, a "Barbie" sticker incongruously decorated the shattered plaster. A legitimate target, the IDF spokesman said, because Hamas may have been nearby.

History is written by the victors and, in spite of a half-hearted effort, Bowen and the BBC comprehensively failed tonight to explore the truth - that this war, like the war in Lebanon in 2007, was a war embarked on by an Israeli Government with poor poll ratings and by a country terrified of any of its neighbours being successful - because if they are, they may cease to be "the Other".

Just as Lebanon has an albeit fragile unity across three or more distinct faith groups, the Palestinians contain a significant Christian minority (the so-called "Living Stones") which enjoys greater protection among its Muslim compatriots than the few Christians inside Israel have in an increasingly monolithic society. These facts are never explored, never revealed - why, for example, was Yasser Arafat trying to reach Bethlehem for the last Christmas of his life, when the IDF decided to besiege him in Gaza for the final terrible, tragic weeks of his time on earth? Because, although a Muslim himself, he was trying to join with his Christian compatriots in their religious celebrations.

The Middle East is a complex, mulitfaceted range of different societies, faiths and politics. It is this that makes it both far more tolerant than people in the West realise and which frustrates hope while simultaneously offering it - Jew, Christian and Muslim have lived longer in peace there than they have in war; it is not impossible they may do so again. But first we have to step back from the simplistic politics of confrontation where manipulative politicians deliberately drive polarisation to the extremes.

This will not suit the western media as it does not sit with a western culture which demands instant, easy explanations with things neatly fitting into boxes and defintions. But it will be the only way to find a solution, the only way to reach any ultimate truth.

And as a start, President Obama and the European Governments which between them wield so much influence over Israel need to recognise that, however unpalatable it may be, Hamas is part of that solution.

Maybe he's been watching too much of the BBC.

In war, truth is the first casualty. Aeschylus Greek tragic dramatist (525 BC - 456 BC)

And the children are the second, followed by the future...
Posted by Viridis Lumen at 09:15 2 comments