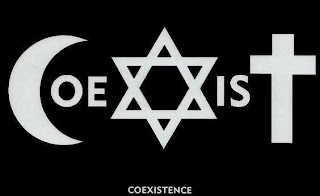 It is always a treat to read something that is tightly written, fresh, and a bit different. This relatively short book (291 pages) is just that - American writer Zachary Karabell captures a broad sweep of history with an exciting gusto that brings periods and places normally obscure to western historians alive and with an immediacy that is explained by his central premise - that Judaism, Christianity and Islam have existed far more in mutual tolerance and respect, and sometimes even harmony, with each other than they have in conflict - whether the conflict of the Crusades or of the contemporary jihadists and neocons.

He takes us through the founding of Islam right up to the 1980s Middle east, yet somehow you do not get the sense of any period being overlooked or short-changed. Whether scholars, soldiers, merchants, priests or philosophers, he brings different ages to life by focusing on individuals of note at various points, though also slips down to take in anecdotes of every day life - how Moses Maimonides, a Jew, felt about working as a doctor at the court of Saladin, the Muslim prince, during the day to go home at night and work on his great treatise of rational Judaism; or how the Muslim caliph, Harun al-Rashid, turned Bagdhad into a centre of multi-faith discourse and learning, where his son held debates with Christian scholars; or how, more recently, men like Abduh argued for a new interpretation of Islam to mirror the Enlightenment process in Europe.

Yet there are dark tales here too - the slaughter of Muslims, Jews and heretic Christians by the Crusaders at the fall of Jerusalem in 1099. The suppression of much of the learning of Islamic centres such as Cordoba and Bagdhad by a more conservative strain of thinking around 700 years ago, one which has persisted in some respects and some societies ever since. And more recently the expulsion of the Palestinians and the creation of an essentially religious based state in Israel in 1948 and subsequently, flying full in the face of history while simultaneoulsy recasting history to justify the present.

Karabell's premise is that, as the third of the three faiths to emerge, Islam has always had to define itself in relation to Christians and Jews, acknowledging them all to have a shared history and a shared God, yet viewing both as incomplete. Mohammed invoked special protection over both Jews and Christians and this is central to the not always easy tolerance shown to both these faiths through history by often politically and militarily superior Muslims.

Contrary to the popular myths in the West of bloodthirsty Arabs forcing Islam on cowed conquered peoples, the book shows how in truth many eastern Christians welcomed the Muslims as they were far more tolerant of their beliefs than their previous rulers, the Orthodox Romans, had been. While in Europe, Jews and Christians who did not hold quite the right beliefs for the official church were persecuted and burned, for centuries, Muslims provided sanctuary to these people, demanding nothing in return other than a poll tax (which excused them from military service, not a bad deal at all). When the Jews were expelled from Christian Spain in the early 16th century, it was the Muslim Ottoman lands that sent ships to carry them to safety - and prosperity under the Sultan and Caliph.

By the same token, Karabell shows that the Crusader states, after their initial belligerence, settled down to a century of tolerance and even interfaith marriage and mixing which worked well for the people in the near east, but caught the inevitable displeasure of the Pope.

So where did this all go wrong?

In one sense of course, it didn't. There are still many societies where people of all three faiths live alongside each other, sometimes integrated, sometimes leading separate lives, in peace. In fact, most of the time, in most places, that is still precisely the case - whether in Egypt with its 10% Coptic Christian populace rearing pigs and drinking wine in a predominantly Muslim society; or in the Lebanon with its multi-religious coalitions, Christian President and Muslim Prime Minister; or in Dewsbury where I live, home to the London bombers but also to the country's first woman Muslim Cabinet Minister.

For most people, their religion is just one aspect of their lives to varying degrees of importance or unimportance. For example, Turkey is portrayed by some in Europe as a fundamentalist Muslim society ill-suited to joining the EU. Yet any visit to Istanbul would show you a city (outside the tourist area) indistinguishable from London, Berlin or Paris, and where a lower per centage of people attend Friday prayer at mosque than turn up at the near empty Churches of England on Sundays. Why then all this talk of a clash of civilisations? And why a desire to rediscover a false history of conflict and despair when in truth the times of togetherness have been far more of the story - and will need to be again for any hope of a future for us all?

There is no neat answer - except that perhaps where there has been conflict, it has been where religion is one of many elements, the central ones being, as ever, social justice and freedom, yet religion has been used sometimes by religious zealots, and often sometimes by populist (or just desperate) political leaders to justify the most dreadful deeds.

If Karabell shows anything, it is that each of these faiths can be and are interpreted in many many ways by their followers. And perhaps there is the one issue he does not tackle - Monotheistic faiths which each claim to be the revealed word and the sole, true, exclusive path to God and Truth, contain within them the seeds of conflict. However hard they may try, either scripturally or as individual believers, to respect, tolerate or even associate with those of other faiths, can faiths which proclaim one God and one way, ultimately live in real peace with each other?

The violence of Bin Laden's jihad and Bush's crusade may sit ill with faiths which proclaim love and peace, but as they each also proclaim themselves as the sole Truth, everything else by default stands ultimately as a lie. And woe unto those who worship a lie when a Believer of a certain ilk, fired up with the zeal of the One True God, steps forward to spread the Word.

Very much worth reading; this book has made and will keep making me think for a very long time.