As the US Presidential election draws ever closer, while Hillary Clinton remains favourite to win, neither she nor her rival Donald Trump draw much enthusiasm from anyone outside the minorities that form their base. Clinton is even more distrusted than at any time in her career following the FBI's not yet finished investigation into her private email account and her opaque responses to the inevitable questions about her judgement. Meanwhile, Trump's sociopathic-like egotism and rampant racism make him arguably more divisive than any major candidate in the last century, worse even than the Republican extremist Barry Goldwater in 1964 (whom Hillary Clinton enthusiastically campaigned for in her student days).

Little surprise then, though woefully undereported, has been the emergence of a large third party vote. Around one in five of those planning to go to the polls in November are signalling support outside of the traditional Republican-Democrat duopoly. Unlike the quixotic campaigns of Ross Perot in the 1990s, or the fantastic voyage of John Anderson way back in 1980, the notable thing is that the challenge is coming from candidates of well-established and growing political parties fielding candidates at all governmental levels and so suggesting that there may now be a lasting trend towards change.

There is a plethora of third party candidates and independents, but the two that matter are the rightwing Libertarians' Governor Gary Johnson and left's Dr Jill Stein of the Green Party, both of whom are standing for a second time. Their platforms are genuinely insurgent challenges to the Establishment - while there is a significant crossover on issues such as net freedom, soft drugs, immigration and abortion, the two are far apart in areas such as government regulation of the economy, tax policy, health provision, protecting the environment and providing state education. Both stand for campaign finance reform and an avowedly non-interventionist foreign/military policy.

The media has only reluctantly started to recognise the rise of Johnson and Stein - the former New Mexico Governor is frequently polling in double digits nationwide, while the Green has topped 6% of the national vote in some polls and is set to win many times her 0.4% 2012 score. Organisationally both parties are better placed and funded than before, with Johnson on the ballot in every state and electors able to vote for Stein everywhere bar four states that have managed to bar the Greens from running (The US is far more adept at limiting choice than even Putin's Russia). 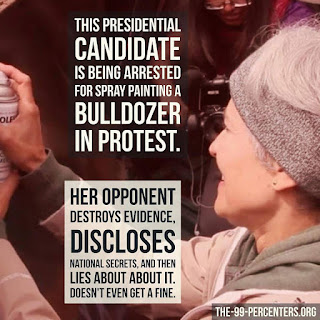 Stein has grabbed some headlines this week after an arrest warrant was issued for her and her running mate, Amaju Baraka, after they were filmed spray-painting mechanical diggers at the site of a planned oil pipeline project across sacred land in the Standing Rock Sioux tribal reservation. The Green Party campaign has built on the Sanders' campaign success within the Democrat primaries, arguing that with the demise of the democratic socialist Senator's challenge to Clinton, the real option for a genuine revolution in US politics is to be found on the left, in the Stein-Baraka fold rather than the ruthlessly establishmentarian Democratic Party.

Indeed, Baraka has suggested that, unlike Sanders, when the Greens talk about revolutionary change, they mean it. Like most European Greens, they have a strongly progressive programme for social justice alongside and intertwined with environmental sustainability, and have formally adopted ecosocialism as their philosophical basis.

More prosaically, Libertarian Johnson has gained unwelcome attention after fumbling over a question in an MSNBC interview about the siege of the Syrian city of Aleppo.

"What's Aleppo?" he asked in response the the question, "What would you do about Aleppo?"
This has been used to suggest he is an isolationist, ignorant of the wider world and so unqualified to be President. Yet, if you watch the whole discussion, Johnson quickly realised what the question was about and gave a perfectly articulate, well-informed response about a diplomatic solution working with Russia, ending support for the FSA and avoiding interventionist wars in the future.

Johnson later said that when the question was asked he was thinking of an acronym rather than the name Aleppo. A big crime to get confused? Not when his Republican opponent avowedly wants to bomb the Middle East to oblivion, while the Democrat one already is.

It is highly unlikely either Johnson nor Stein will meet the 15% score required to win a place in the TV debates with Trump and Clinton - if either or both took part, it would undoubtedly shift both the quality and tenor of the argument immensely and be a huge step in busting the race open. Yet in any case, the third parties' rise at a time when the traditional parties are collapsing on themselves is a welcome reminder that, even in a large, neoliberal superpower, with all the forces of Big Money and Big Brother ranged against true democracy, no Establishment is forever.