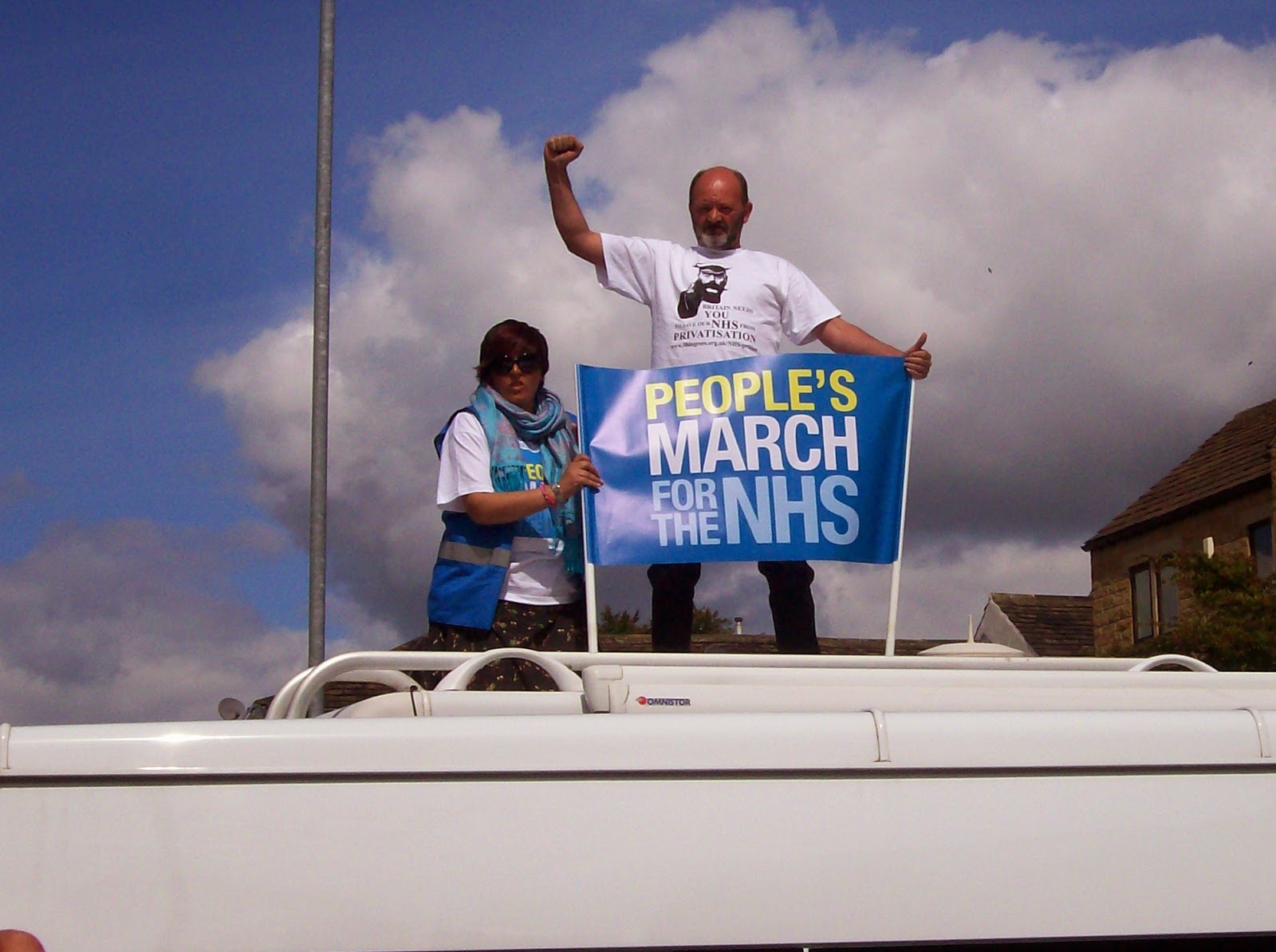 After spending two days on a "feeder walk" from Halifax and Huddersfield through Dewsbury, I joined the Jarrow to London People's March for the NHS at Wakefield last Saturday. Then on Sunday, in blazing sunshine, we moved on along city streets and country roads to Barnsley, ending with a rally at the hospital. Green colleagues who did the next leg the following day met grey skies and rain, but the crowds appeared to have grown and today saw the marchers exit Yorkshire after a rousing send off from Sheffield on their way out of the county towards Chesterfield.

The march was set up by some mothers from Darlington in north-east England, who had grown increasingly concerned about the deterioration of the NHS over the last few years. Through the 999 Call for the NHS, they are retracing the steps of the 1936 March for Jobs from Jarrow to London to highlight the health service crisis engulfing England.

It was especially powerful to walk for a time with Jo Adams, one of the Darlington Mums who told me about her family's terrible experiences recently with an increasingly chaotic, disjointed health service and her fears for the future. And it was very moving indeed as we went through Barnsley with people coming out of their houses to cheer and applaud us on, and cars sounding horns in support. Following the route of the original march, Jo and her group will reach London on 6 September - if you are near the route, please go and join them, even if just for an hour or mile or two. Find out where you can meet them at http://999callfornhs.org.uk/ and follow them on Twitter via @999CallforNHS.

There was a huge mix of people taking part - disabled activists, current and past patients, councillors, parliamentary candidates, health workers, GPs, Greens, Left Unity, Communists, Labour, parents, children, citizens - and even some Americans. Balloons proclaimed our love of the NHS, its visceral hold on what is left of community in modern Britian self-evident as was the obvious fact that in spite of the paramount importance of our public health service, it is symbolic of a wider campaign to restore genuine public services in areas now so frequently sold off or leased out to profit-seeking
privateers such as education, social services and transport.

Among the most frequently cited concerns among people on the marches were the deliberate underfunding and privatisation of health services at all levels in England. Under the "Nicholson challenge" set by the Blair/Brown Government, and gleefully continued by the current one, the NHS is required to return £2,000 millions from its budget each year, supposedly in efficiency savings. The result is hospitals in crisis - our local Mid-Yorkshire Trust is £17 million in debt and running down services accordingly.

The Coalition Government has removed the duty to provide universal care free at the point of use and so we now see an ongoing debate to charge up to £25 for GP visits and possibly more for the apparent crime of going to the A&E department. The latter is often used by the Coalition as a supreme example of wasted resources, conjuring up the image of drunken chav teenagers descending on A&Es across the country from Friday lunchtime to the final effusions on a hazy Monday morning. Notwithstanding the brave struggle of medics and paramedics with the byproducts of our neoliberally deregulated entertainment industry and its excessive focus on flogging as much booze as possible, the truth is somewhat more prosaic - research by the College of Emergency Medicine shows that fewer than 15% of A&E visits could be dealt with by GP intervention; hardly enough to justify charges to deter alleged timewasters.

Even worse, as required by the 2012 Health & Social Care Act, NHS services - even cancer care - are being put out to tender and since April last year 70% of the contracts have been awarded to the private sector, to companies like Virgin and Vanguard, Spire and Specsavers. The NHS is fast becoming a brand name for a profit-seeking franchise rather than an integrated public service: a sort of Spar of Sickness, if you like.

But to me personally this crisis is as strikingly in evidence in some small but nevertheless important ways. My father-in-law passed away last year after a long illness with cancer. During his treatment, I recall one evening visiting him in hospital and having to go out to a local supermarket to buy pillows for him as the hospital did not have any spare. On the way back, in the lift, I met a woman who had brought a duvet for her husband because they had run out of clean blankets. Even the ward toaster was not replaced when it broke.

We are the sixth richest country on planet Earth. But, depending on which measurements you use, we are also the second or third most unequal. Our Governments have sold off public asset after public asset, telling us the private sector will run them more effectively in spite of its ever growing need and ability to take out more and more for profit. Energy, telecommunications, the railways, the bus service, huge swathes of our universities and colleges, the post office, the probation service, Job Centres, the passport agency, and now the NHS have been or are being sold off or leased out at often bargain basement rates to the very people who are funding our political parties and/or in whom our politicians hold substantial financial interests. Even opposition politicians like Labour's former health secretary Alan Milburn and former Chancellor Alistair Darling have taken contracts of one sort or another from private health firms.

And now, if they have their way, the three Westminster parties want to sign the TransAtlantic Trade & Investment Partnership treaty, part of which will require states to put public services out to tender - if they don't or if they bring in regulations to protect employees or consumers, even via the ballot box or a referendum, the State-Investor Disputes mechanism will allow big companies to sue for compensation for loss of profits. As blogged previously, some examples of these from existing "free" trade agreements around the world have seen governments having to pay corporations hundreds of millions of dollars as reparation for such heinous acts as wishing to protect forests and put health warnings on cigarette packets.

Some Government Ministers and Labour MPs (Labour are almost as keen on TTIP as the Tories and Lib Dems) have suggested the NHS could be exempted from the TTIP. However, the agreement covers all commercial enterprises and by marketising and contracting out NHS services, the NHS is subject to commercial law and, as such, can not be exempted from the TTIP. Any attempt to do so would almost certainly lead to legal cases running into the hundreds of millions in terms of costs to the Exchequer as well as possibly years of uncertainty. Besides which, when did the Tories really not want to sell off the NHS in any case?

We can and must do better than this. There is no real need for austerity - only for redistribution: of wealth and of ownership. The 999 Call for the NHS is a brave and imaginative initiative: it reaches deep into the hearts of tens of millions who have always assumed we live in a society where you will be cared for if you fall ill. Terrifyingly, under our very noses, duplicitous politicians are taking all that away, replacing the motive of public service and community with the selfish drive of profit. It is time to purge ourselves of this parasitical class of professional legislators and, in its place, create genuine democracy far beyond the simplistic notion of five yearly trips to the ballot box; democratic ownership is absolutely central to a society that uses its resources for the common good.

And such a society is still possible, even essential. Perhaps the journey towards it began a couple of weeks ago on the streets of Jarrow.

Email ThisBlogThis!Share to TwitterShare to FacebookShare to Pinterest
Labels: 999 Call for the NHS, Barnsley, Jarrow, NHS, People's March for the NHS, TTIP, Wakefield

We Will Remember. And One Day Learn.

Bent double, like old beggars under sacks,
Knock-kneed, coughing like hags, we cursed through sludge,
Till on the haunting flares we turned our backs
And towards our distant rest began to trudge.

Men marched asleep. Many had lost their boots But limped on, blood-shod.
All went lame; all blind;
Drunk with fatigue; deaf even to the hoots
Of tired, outstripped Five-Nines that dropped behind.

Gas! Gas! Quick, boys!---An ecstasy of fumbling,
Fitting the clumsy helmets just in time;
But someone still was yelling out and stumbling,
And flound'ring like a man in fire or lime...
Dim, through the misty panes and thick green light,
As under a green sea, I saw him drowning.
In all my dreams, before my helpless sight,
He plunges at me, guttering, choking, drowning.

If in some smothering dreams you too could pace
Behind the wagon that we flung him in,
And watch the white eyes writhing in his face,
His hanging face, like a devil's sick of sin;
If you could hear, at every jolt, the blood
Come gargling from the froth-corrupted lungs,
Obscene as cancer, bitter as the cud
Of vile, incurable sores on innocent tongues,

--- My friend, you would not tell with such high zest
To children ardent for some desperate glory,
The old Lie:
Dulce et decorum est
Pro patria mori.


Wilfred Owen died fighting in the trenches on 4 November 1918, just one week before the end of the war. 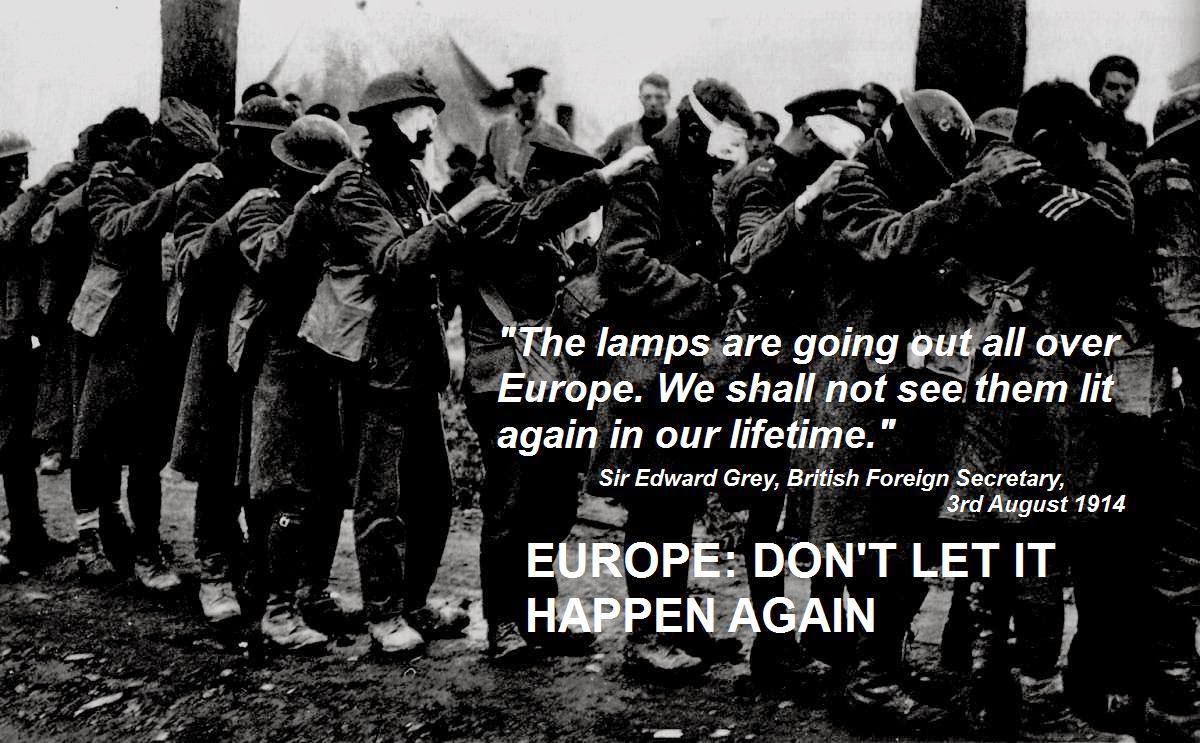