Dry Cleaners of the World Unite: Democracy is in Danger! 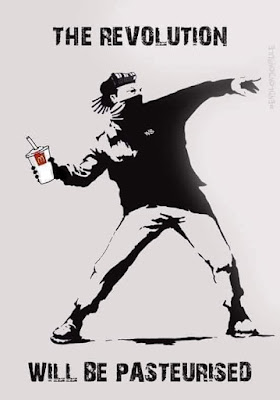 So yesterday in Newcastle Nigel Farage became the latest rightwinger to have a milkshake tossed over his lovely pinstripe suit.

It is a trend that started when would-be MEP Stephen Yaxley-Lennon, aka Tommy Robinson, was hectoring a young man who, pushed to the edge of reason, poured his own recently purchased liquid confectionery over the former EDL leader. Soon after, Carl Benjamin, aka Sargon of Akkad, a UKIP candidate in the south-west, was milked not once, not twice but four times. Even the Peterborough stall of the re-formed Social Democratic Party, a bolt-hole for allegedly moderate former Kippers, was splattered on Monday, though their only casualties were some leaflets.

Social media has of course been abuzz with pictures and memes - from relatively mild speculation about dairy-free alternatives for would-be vegan assailants through "this is what happens when lactose meets intolerance" to rather cruder speculation about neo-Nazi sexual practices. But, while predictably the rightwing mass media and rightwing groups have howled with rage about this alleged assault on free speech, so too have some on the left voiced concerns about the thin-end-of-the-wedge. Surprisingly, what would previously have been generally viewed as relatively minor, whimsical acts of protest are seen by a not small number of progressively-minded people as a serious threat to the democratic process.

You start with milkshakes, one Green activist warned me, and before you know it, people are committing atrocities like murdering Jo Cox.

Well, no. It may be a bit silly and an arguably counter-productive act to waste a tasty cold beverage on the likes of Farage, but there is a quantum difference between someone staining Nigel's jacket and Thomas Mair gunning down an MP in Birstall market.

The milkshake option (caramel and banana, I believe) follows a long tradition in political protest, one which, while messily dramatic, is ultimately entirely peaceful with clothing the only casualties and temporarily so given the prevalence of new-fangled contraptions like washing machines. It is just the medium that is new: in the past, a variety of soft food products were a popular option - precisely because, as with milkshakes, these can express disdain and anger with very little chance of anyone actually being hurt (physically at any rate, egos may be a different matter).

In 1970, after his car was pelted with eggs during the General Election campaign, Labour's Harold Wilson's response was to quip, "If the Tories get in, in five years time no one will be able to afford an egg." In 1992, Margaret Thatcher was hit by a bouquet of daffodils, while then Deputy PM John Prescott was doused in iced water by members of Chumbawamba at the 1998 Brit Awards.

My personal experience of this was standing behind the late Labour MP Tam Dalyell at a march against the looming Gulf War in 1991 when a flour bomb struck him between the shoulders, the powdery fallout temporarily bestowing my face with a ghostly Halloweenesque quality. Dalyell however dusted himself down, grinned at me and plunged into a speech about peace.

A few years earlier, at a meeting at Glasgow University where the SDP leader Roy Jenkins was speaking, I witnessed a paper aeroplane hurtle out of the mass of a far from sympathetic audience to land squarely between his bespectacled eyes. Jenkins' response was to coolly carry on speaking while he retrieved the missile from the desk in front of him before nonchalantly launching it back in the direction from which it had come.

There are scores of similar incidents down through the years. John Major, Nick Brown, Michael Heseltine, Nick Griffin, Peter Mandelson, Tony Blair, Ed Miliband - all these and many more have been pelted with rotten fruit, had chocolate eclairs shoved in their hair or ended up with egg on their faces. Democracy wasn't imperilled and politicians did not call the police to report crimes against their laundry.

Until yesterday, that is, when Farage bravely called the police and made a statement which landed his "attacker" in court charged with common assault and criminal damage.(Of course, Nigel has form when it comes to wasting taxpayers money on his whims - among other charges to the public purse, he similarly insisted on a prosecution of an egg-thrower in 2014.) Whisked on from Newcastle to Wakefield, he refused to leave the "safety" of his bus while vowing (I jest not) to "keep buying new clothes" until polling day.

Well, forgive me, but I shall not weep. In or out of the carton, milkshakes do not threaten democracy. What does are people like creepy "Sargon", who ponders on twitter about whether or not to rape a Labour woman MP; or Farage himself, who has belligerently promised his "People's Army" that he will "pick up a rifle" to ensure the Brexit of his choice happens.

Little more of course than inflammatory bravado when in truth he turns tail and runs from chocolate-dusted cream, but inflammatory all the same and it is this, not harmless acts of protest, that we should be worried about. Because Farage may never lift anything heavier than a pint - but who is listening to him, and what are they thinking and doing?

The murderer Thomas Mair shouted far right slogans - "Britain first!" - as he slaughtered Jo Cox with his knife and home-made gun, and just today we learned that the police and MI5 have been tracking scores of far right extremists who have plotted to murder Labour MPs and carry out major acts of terror. In a number of cases these fascists were dissuaded from committing slaughter only by agents revealing that they were being tracked and their plans were known: the police have not been able to arrest or prosecute in many cases. Instead, they walk our streets, their minds filled with rather more sinister ideas than dispensing sugary drinks over their opponents' heads.

So forgive me, but as I look at the comparisons, I am not losing any sleep over a millionaire's dry cleaning bill.
Posted by Viridis Lumen at 15:18 0 comments