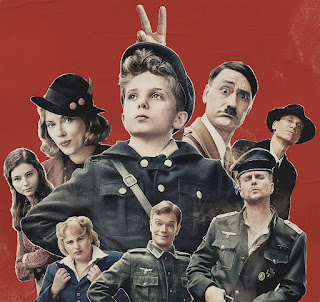 After viewing this film, currently doing the rounds, the overhwelming reaction has to be to ponder how it has been received with so much approval. It succeeds as neither tragedy (it is dramatically anodyne) nor comedy (there are about 6 or 7 funny lines, all shoe-horned into the trailer) and it bafflingly promotes masses of hate jokes and really crude Nazi-era stereotypes against Jews in a weirdly sanitised way.

Set in the closing weeks of the war in the cleanest and cheeriest Nazi town you could imagine, the story centres on Johannes Betzler, an enthusiastic member of the Hitler Youth, creditably played by Roman Griffin Davies, who discovers that his mother (Scarlett Johansen in a dialled-in performance) has been hiding a Jewish girl, Elsa Korr (Thomasin Mckenzie), in their attic.


"Jo" Johannes has an imaginary friend in the form of "Adolf", (portrayed by the writer-director Taika Waititi), who is both a good-humoured and, apart from a final tantrum, thoroughly unthreatening Fuhrer. And just as there are Jewish stereotypes, so too we are bombarded "mit ze stock German vee-haf-vayz" accents from actors like Sam Rockwell who should just know better.

There are also suitably sinister SS agents a-plenty, with Stephen Merchant blatantly taking off Herr Flick from 'Allo 'Allo, but anything unpleasant happens off-screen and pretty much everyone, even the Jewish fugitive hiding in the attic, has a fairly good time until the Soviets turn up and spoil things by butchering the happy-go-lucky Hitler Youths(again off-screen).

It's a sort of smug "Mein Kampf for CBeebies", and of deeply questionable provenance. To my mind, it lazily diminishes the horrific genocidal truth of the Holocaust and of life in Hitler's Germany. There is an absence of fear, and even of restriction - Johannes' mother very openly and casually posts anti-war leaflets round the town and although there are awful consequences, somehow there is a bloodless quality to it all. The war is referenced, but life seems impossibly well-fed and relaxed to the point that, beyond their  immature snickering at the crude drawings of Jews in Johannes school jotter, anyone without a fairly full pre-existing understanding of the reality would be forgiven for wondering what was actually wrong with Nazis.

It is not a patch on the films Waititi perhaps imagines he is emulating, such as Life Is Beautiful or possibly even parts of The Pianist. However well-intentioned, it ends up more like an uncomfortably poor but accidentally real tribute to "Springtime for Hitler" the fictitious Nazi musical in Mel Brooks 70's classic, The Producers.

Coming out the cinema, I could only wonder what the point of it all was. I could only conclude that whatever Waititi's intentions were, the film is a mistake

If it was to show things from a child's perspective, it makes its lead character neither sufficiently credulous nor fanatical, nor, well, childlike even. Veering towards slapstick via attempts at satire and thoughtful interlude produce an uneven and meaningless mish-mash.

It is all done from a painfully knowing perspective, perhaps dangerously presuming that its audiences will be as clued up about and hostile to Nazi Germany as its creators. It presents prejudice and racism in a misguidedly whimsical way, supposedly to highlight the innocence of Johannes, but it would not be far-fetched to imagine anti-Semites turning this into something of a cult movie for themselves, displaying as it does all their prejudiced thoughts about Jews and doing absolutely nothing to challenge them beyond the painfully obvious foil of having an adolscent boy fall for a slightly older and oddly calm refugee.

And if Labour MP Naz Shah was suspended for anti-Semitism because she tweeted a fairly unremarkable joke about the Israeli-Palestinian divide from The Big Bang Theory, written by Orthodox Jewish scriptwriters, (and thus kicking off the whole Labour crisis which has now crossed the Atlantic to target socialist Presidential insurgent Bernie Sanders), how on Earth does a film showing unchallenged pictures of Jews as bats, vampires, worms and much worse end up being lauded and nominated for prestigious industry awards by the squealingly mindless media glitterati?

The David Bowie track doesn't help. Save your ticket money for something else.