Australia Is Burning (from March 2013) 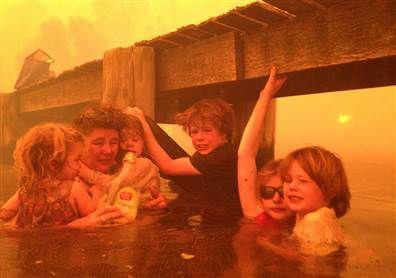 For years, the proponents of global warming have worried that, because most carbon emissions are invisible to the human eye, the damage human activity has been doing to our planet has not been evident to the public. Talk of increasing levels of CO2 in the atmosphere have met with blank looks or even mild amusement at the prospect of warmer summers in places like the UK. Any impact, we have been told, would be decades, even centuries, away.

Yet here, now, this week, one image stands out which more than many shows more graphically than any both the truth and the real impact of global warming: it may become an icon of the climate change debate, its blood reds hues the danger light shining through the portal of the future we will all face if we do not act drastically and urgently to tackle this planetary crisis.

In Australia, a family were trapped by what were described as a series of "fire tornadoes" which have devastated large tracts of parched Australia. In this case the fires destroyed the town of Dunally on the island of Tasmania and forced the Holmes family to take desperate refuge in the sea as the ground around them burst into flames, trapping them. Only the presence of the water saved their lives. The grandfather of the children in the photograph above captured the dreadful moment.

Australia has never been the coldest region on the Earth; but while parts of the continent have had bush fires for centuries, the level and intensity have been reaching new records each year for many years now. And this year has been so extreme in its heat that the weather service has actually introduced a new colour range for extreme high temperatures on its charts. Two shades of purple now indicate temperatures between the previous 50C limit and 54C as Australia burns in a long, record-breaking heatwave.

And in the USA, its weather service has confirmed 2012 was the warmest year on record, while the Arctic sea ice melt last summer reached a record level.

Here in the UK, the Met Service issued a report on global warming which has been grossly misrepresented by the media, the ever sceptic Daily Mail in particular. This identified that natural weather cycles have reduced the rate of global surface temperature increase by around a fifth, so that in the 20 years from 1997 to 2017, there will be no overall temperature increase. Climate change deniers have jumped on a bandwagon trumpeting the usual hysteria about global warming being some sort of worldwide socialist conspiracy - but in doing so they are doing no one a service. Because the report does not say there has been no warming - what it says is that, if there was no warming, the last 20 years would have seen natural cycles reducing the overall surface temperature - but because of carbon emissions, the effect is that instead the temperature has stayed the same - while the underlying trend remains sharply and relentlessly upwards.

It is a slightly complicated situation and one that the deniers have happily twisted to try to pretend it tells a story that it doesn't.

The consequences of their actions may be catastrophic - the repeated propaganda from deniers, who are frequently funded by the same groups of companies that used to pay lobbyists to deny that tobacco damages people's health, has begun to have an impact on public opinion. Across the planet, more and more people are taking the view that global warming is not a result of human activity but either a purely natural phenomena (and therefore unavoidable) or even a blatant lie, perpetrated by faux academics who need grants to keep them in work!

Consequently, with the Obama administration repeating the calumnies of the Bush regime in refusing to engage in any international agreement to cut carbon emissions, as well as continued growth in emissions throughout the world, all the indices show that global warming is advancing more sharply and more quickly than even the most pessimistic scenarios used to suggest. We are looking at timescales of a few decades at most, not centuries, before the planet suffers such disruption that we face social collapse and even a full-on, Sixth Extinction.

Australia is burning. It should heed the sights around it, though there is scant evidence that it will - at over 27 tonnes of carbon emissions each year per inhabitant (the "safe" limit for the Earth is about 2 tonnes.), it is in the top seven most polluting countries on the Earth per head of population, with only Trinidad and a few Arab sultanates worse. Yet its public remains steadfastly one of the most sceptical in the world. Seeing, it seems, is not necessarily believing - especially if you decide to close your eyes to the devastating truth all around you, even when you are over half way towards boiling point.

It is a terrifying denial of reality the rest of the world needs to wake up to urgently. 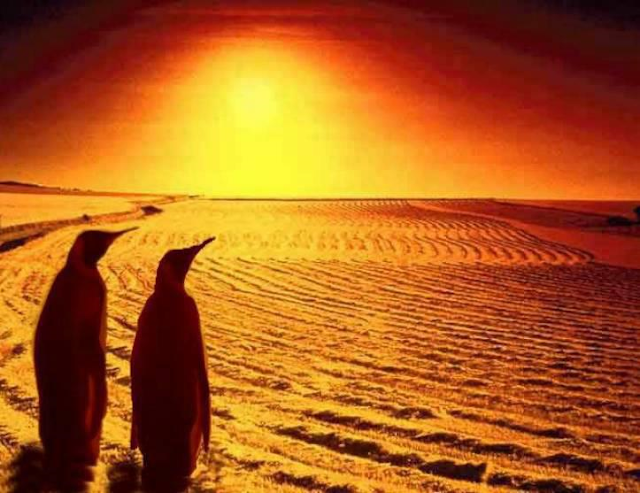