IT CAN'T HAPPEN HERE - The Last Lament of the Liberals 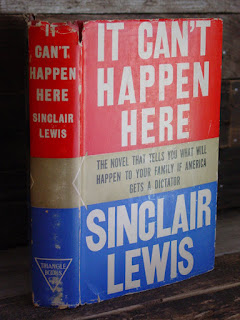 “But he saw too that in America the struggle was befogged by the fact that the worst Fascists were they who disowned the word ‘Fascism’ and preached enslavement to Capitalism under the style of Constitutional and Traditional Native American Liberty.”

Perhaps not now a household name, the mid-20th century American writer Sinclair Lewis  has enjoyed something of a revival in the last year. The first US Nobel Laureate for Literature, he came from modest middle-class Minnesotan beginnings to qualify for Yale in 1903. While there, he began a writing career that brought him to co-operative activism with the muckraking socialist Upton Sinclair, to pitching plot lines for Jack London, to marriage with an editor of Vogue and to personal friendship with the Third Reich chronicler William Shirer. Sadly as well he developed an ultimately fatal acquaintance with the bottle.

Lewis initially made ends meet by turning out pulp fiction for magazines and the romance market, but his intent was to map out the contradictions and fallacies of the capitalist American dream.
His breakthrough Main Street in 1920 sold two million copies. Next, Babbit (1921) satirized American commercialism in a fictitious town that was to host two future novels of his. He won the Pulitzer Prize for Arrowsmith (1925) which highlighted the subversion of medical science by profiteering, but turned it down on the grounds that the prize was meant to be for stories that celebrated the wholesome nature of life in the USA. His did not.

With further works covering the hypocrisy of organised Christianity and the pointless lives of the rich, he did accept the Nobel Prize for Literature in 1930, noting in his acceptance lecture that Americans were scared of literature that was in any way critical of their society, reflecting the fact that “America is the most contradictory, the most depressing, the most stirring of any land in the world today.”

Perhaps little has changed in the eight and a half decades since; a fact sharply reflected by his 1935 It Can’t Happen Here.

Republished this year in the UK by Penguin Classics, this was written in some haste in just a few weeks as Lewis sought to warn his compatriots of the rise of fascism in their midsts as well as in contemporary Europe. Against a real life backdrop of the KKK, Huey Long and the final years of Tammany Hall’s grip on New York, It Can’t Happen Here sends a warning through the years about what happens when morally bankrupt liberalism finally fails.

In Lewis’ story, years of poverty and hopelessness amidst the Great Depression give rise to a variety of movements among the poor (or the Left Behind, as the Guardian would patronise their modern day counterparts). The League of Forgotten Men and Great War veterans rise to the radio-bait of the fiery Bishop Paul Peter Prang, a dead-ringer for the anti-Roosevelt Father Charles Coughlan. Like Coughlan, Prang preaches an anti-big business, anti-banker message to the Common Man, soon modified, both in the novel and for real, to a Hitler-approving anti-Semitism as well.

Into this tumult steps Senator Berzelius “Buzz” Windrip, a Democrat with a populist message who successfully wrests the 1936 Presidential nomination from Roosevelt and proposes a blasé, vague ten point plan to take on big business and “make America a proud, rich land again.” With him comes Corporism, modelled by his Bannon-like eminence grise Lee Sarason on Mussolini’s corporatist state, and essentially Government by Thugs in corrupt accommodation with big business rather than opposition to it.
Windrip is elected President and almost immediately the Constitution is subverted, labour camps are opened for the unemployed, concentration camps for political opponents and violence and murder become State policy implemented by the Minute Men, a paramilitary force modelled on Revolutionary-era militia.
The President’s mood darkens as his difficulties mount, leading to him regularly hire and then fire his assistants – and, strikingly, he eschews living in the White House, which he doesn’t like, opting instead for the penthouse of a Washington hotel. Like someone else, he doesn’t live with his wife, seeing her mostly on formal occasions, but Windrip does momentarily dream of becoming Emperor of the Americas (we can only speculate on how prophetic this is, of course...)

Windrip’s platform is clearly shaped on Huey Long, the Governor of Louisiana, who challenged the first Roosevelt Administration (1932 to 1936) on its failure to tame the banking sector and ran from the left with a populist “Share Our Wealth” movement against the predations of the big oil and railway companies. Long's demand to cap wealth and redistribute it via a form of basic income to give every family an estate is replicated in Lewis’ tale by Windrip's promise of a minimum wage of $5,000 per year. Fearing Long's initial successes in mobilising millions of supporters, Roosevelt headed off his threat by making tackling rampant economic inequality central to his 1936 Second New Deal and moving the Democrats a few notches to the left. Notably, when Obama faced similar populist challenges after the 2008 Crash, these came from the right rather than the left, and he fatefully responded accordingly.

Lewis’ point is not anti-redistribution – quite the opposite as his pieces on common ownership and co-operative living late in the story show – but rather how messages appealing to the desperate can be used to subvert genuine democracy and divide rather than unite. Alongside the anti-Semitism of Prang/Coughlan run the denial of civil rights and material equality to black people by Windrip/Long. (Women meanwhile don't figure at all, with Windrip advocating their return to all-American Motherhood and baking apple pie).

Like populism through history, Corporism's appeal is to grievance rather than genuine social transformation and so, while the language may be of anti-elitism, it soon identifies other scapegoats. Contemporary to Lewis of course the tide of anti-Semitism was far from confined to Nazi Germany, while a modern version might as easily focus on Muslims or migrants. If for no other reason, this bigotry is essential for populists to maintain themselves in power as much as obtain it - the continuing malign conspiracies of these social enemies and malcontents being handily used to explain the disappointingly less than bright new dawn for many of the loyal citizens of the new totalitarian society.

Lewis’ protagonist, the progressive and initially very bourgeois liberal provincial newspaper editor Doremus Jessop, reflects how even although many are economically worse off under Windrip, the populist President’s supporters show far less anger at this than his “rational” progressive friends can comprehend, rallying instead to parades, flag-waving and marching-bands.

“They took to it, too, like Napoleon’s soldiers. And they had the Jews and the Negroes to look down on, more and more. The Minute Men saw to that. Every man is a king so long as he has someone to look down on.”

There are some truly jarring passages prophetically lighting up the casual brutality of dictatorship and the craven surrender of the liberal elite to the demagogues of populism, swayed by reassurances of material security. Perhaps the most striking, written several years before the Nazi Holocaust began, is an incident where Jews are locked in a synagogue and gassed to death with truck fumes. A suspected gay man is brutalised by militamen, while nuns are raped and "un-American" books seized for public bonfires.
Later, with chilling prescience, Windrip’s regime seeks to bolster public support by manufacturing a border crisis with Mexico to justify it making its neighbour pay for its alleged transgressions. (“It was planned to invade Mexico as soon as it should be cool enough, or even earlier if the refrigeration and air-conditioning could be arranged.”)

It has been noted elsewhere that It Can’t Happen Here isn’t Lewis’ best book; it dwells overmuch at times on Jessop’s domestic life, then leaps more into political discourse than story-telling, and of course was written for a different age. But it moves along and has some powerful resonance today, not only for the USA, but for all of us – of the trumping of cold reason by (apparently) heartfelt passion; of the bankruptcy of an economic system that rewards the few rather than all; and of how the long, slow death of liberal capitalism offers great opportunities for change, but also the grave danger of something even worse.

“As month by month they saw they had been cheated with marked cards again, they were indignant; but they were busy with cornfield and sawmill and dairy and motor factory, and it took the impertinent idiocy of demanding that they march down into the desert and help steal a friendly country to jab them into awakening and into discovering that, while they had been asleep, they had been kidnapped by a small gang of criminals armed with high ideals, well-buttered words, and a lot of machine guns.”