Callous Capitalism; or The Land With Three Empty Homes For Every Person Without A Home

In the days when capitalism truly is dead and buried, in the annals of the Great Collapse in the UK, this last week may well be marked as a seminal moment in our history. As with most seminal moments, of course, no one notices at the time and it is left to the historians to mark them, and even invent them. But perhaps Monday 6th February will be remembered as the day that the arch-champions of capitalism and the representatives of our ruling elite let their mask slip, however unintentionally, with a frankly startling admission of the failure of our market economy, the system they have fought so hard to impose on everything that moves and nearly everything that doesn't.

Launching the Tory Government's latest White Paper on housing, Communities Secretary Sajid Javid MP told the Commons that, "Our housing market is broken. We have to build more, of the right homes in the right places, and we have to start right now.”

Javid went on to detail the litany of disaster most of us are more than familiar with - average house prices are now 7.5 times average annual salaries; mortgages frequently swallow up over half of household income; fewer and fewer young people can get affordable rented property never mind snatch hopelessly at the cruel  illusion of home ownership. The result is stay-at-home offspring remaining in the family home into their late twenties and early thirties, jobs away from home being unaffordable because of the inability to rent and the formation of new household by young couples frequently delayed or even frustrated.

Javid declared that Britain needs to increase annual housebuilding completions from 190,000 units in 2016 to 275,000  as soon as possible. The white paper, strikingly if laughably titled "Fixing Our Broken Housing Market" then comes up with a rag-tag mix of banning letting agency fees, "incentivising" smaller construction companies, reducing the time that developers can leave construction unstarted after planning permission is granted and, perhaps most incredibly of all, "forcing" councils to start building council housing again.

For those too young to remember, much of our housing crisis was brought on very predictably by the Thatcher Government's determination to destroy council housing. First of all came the tax-payer subsidised "right to buy", whereby hundreds of thousands of council tenants were deceived into home ownership that sooner or later saw most of the sold stock resold into the hands of private rental agencies.

Next came the effective blocking on councils from building new council housing or even using the receipts from sales to maintain the stock that remained - for years, several billions pounds sat frozen in bank accounts. Housing associations, originally small community enterprises providing cheap, niche accommodation to vulnerable groups, were effectively taken over, forced to expand with central-government provided Housing Corporation money and then driven to become in effect large faceless companies far removed from their original purpose.

Then finally came the coup de gras: large scale transfer of remaining council housing to large scale housing companies, notionally not-for-profit but, as government funds were reduced and housing groups grew ever larger, functioning more and more like big private landlords. In some places, housing trusts were created by effectively hiving off and privatising the local council housing department as an ALMO (arms-length-management-organisation), which was great news for the bank balances of some transferring senior staff, but not so good at all for the lower paid staff, eventually shorn of their council terms and conditions, and most of all of little use to tenants and their communities.

Chuck into the mix the deregulation of the private rental sector - last year, the Tories passed a law that removed any requirement for private landlords to ensure their properties are fit for habitation - and the advent of previously banned buy-to-let mortgages, now almost one in five of new loan approvals, and the stage was indeed set for housing apocalypse.

With much new build now not even lived in - just pop into central London or the edge of Cambridge to see the thousands of "investment properties" owned like so many vintage wine bottles by the global elite, sitting empty, their owners preferring to avoid the hassle of rental while they wait for their assets to appreciate in value. Buy to let has very often become buy-to-leave (empty).
Unsurprisingly, this callous disregard of the real needs of real people has meant more human beings chasing fewer properties actually available to rent or buy, inflating prices massively. It is a process that the state even subsidises, exempting these often large scale property investors from full council taxes. 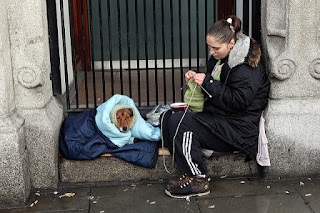 And so, Britain's 700,000 empty properties are no surprise, but no less an obscenity because of it. With official homelessness figures soaring and migrants the appalling and false scapegoat for the greed-is-good mentality that infects our developers and our elite, Javid's admission of market failure, while disarmingly honest, is nevertheless not exactly news. And his white paper leaves almost none of the real problems tackled - no action on empty homes, nothing to end the scandal of tax-advantaged buy-to-let loans or to break up the now huge housing corporations that dominate the "affordable" housing sector. People on even above average incomes will remain mired in debt, genuinely struggling the keep roofs over their heads and those of their families.

And, of course, more and more no longer have roofs over their heads; 250,000 people - a quarter of a million - in England alone are homeless and many really, truly have nowhere to go and are sleeping rough as a result. 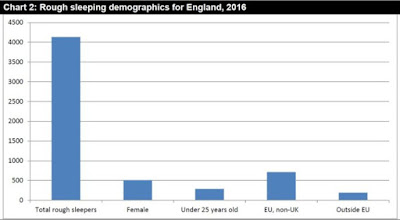 Last week, in Cambridge, the city that is growing fastest of all in the UK, where cranes and construction hoarding are ceaselessly painting a new skyline as more and more investment properties are built and snapped up by the rich, I spoke to a man camping in a shop doorway on a freezing cold night. I recognised him as Tony from the previous summer when I had spoken to him in the same doorway on a better evening. As we sipped coffee and chatted, he told me he had been homeless for three years now and had nowhere to go that night. There was an emergency shelter but because he had turned up 10 minutes after 11pm curfew the previous week they had turned him away into a freezing, rainy night. Perhaps unsurprisingly, he had sworn at them and so was barred for a month.

He is one of many. Like Chris, whom I encountered, shaking from cold this afternoon in Leeds, or a street away last month John, who was curled up in a blanket outside HMV, his wispy beard, bedraggled hair and sunken cheeks giving the appearance of a dying Jesus, discarded on the edge of the crowds doing their shopping.

And so too with the many others who have silently come back onto previously empty streets over the last four or five years. If you look, you will see them, the young couple crying on the steps of an empty bank in New Street in Birmingham, both not long out of care, with no money and no food. Or Brian huddled on the ground in the rain under his umbrella with his dog on a Sunderland street; or the young man on a back stairwell in Edinburgh, thrown out when his mother was evicted and
apologising to everyone he shyly asked for a few coins to help him. 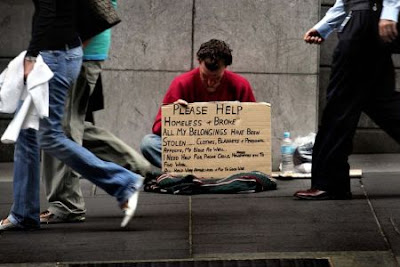 All of them are there - many of them terribly young, and all with the same desperate stories, the utterly unwarranted shame in their voices, their pale, paper-thin sunken cheeks and their sad, sad eyes. Bedding down on concrete pavements on the streets of the fifth richest country on planet Earth. And the second most unequal in the western world - a country where there are nearly three empty homes for every homeless person.

It's not just Javid's housing market that has failed. It is our whole, corrupt capitalist economy and the twisted society it has forged on its own fantasies where freedom is money and money is freedom. This week, its custodians have finally admitted that the edifice is crumbling. When the whole rotting structure comes tumbling down, as it soon will, we must be ready to build anew - not just buildings and economic systems, but lives, homes and dreams too.