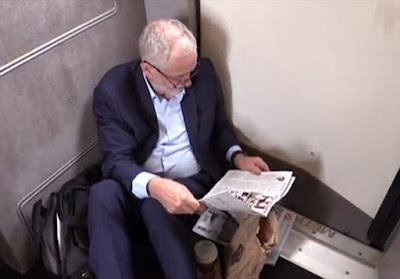 Shock! Jeremy Corbyn may have found a seat on a Virgin rail service after calling for railways to be re-nationalised while being filmed on the floor outside the toilet on one of Branson's specials up to the Tyne.

Well good on him! For in spite of the privatised rail firm's best endeavours to pour scorn on his claims of not being able to find a seat, anyone unfortunate enough to use their service on any regular basis will know that they are frequently crowded or the seats are all booked up even if unoccupied, which was precisely the problem Jezzer faced on his odyssey to the Tyne.

Try the morning service from Leeds to Birmingham (it goes on to Plymouth) if you want to stretch your legs for a couple of hours, or the ones in the opposite direction anytime after 4pm if you want to get acquainted with the acrid mixture of post-workday body odour and the obstacle course of luggage that stands in the way of the dozen or so people irritably vying for the last unbooked seat.

Indeed, sometimes, even if you manage to get a seat, a little electric panel above will inform you in a less-than-unmenacing manner "Seat may be reserved en route". Yes, even although you've got an unbooked seat, Jezzer, if he finds out where you are, Owen Smith might try to book it out from right under the seat of your pants. Now, doesn't that sound familair?

Of course, Corbyn's biggest mistake wasn't his video. It was boarding a Virgin train in the first place. As a rule, while the staff are usually perfectly nice, the environment is claustrophobic. Quite aside from fitting in other people, there's usually no space for luggage beyond something the size of a toilet bag. This is an item the average Virgin user might struggle to avail themselves of as the bathrooms in turn often don't work and, in my humble opinion, more than rarely fill the whole carriage with a certain all-embracing odeur d'ordure. Indeed, any regular tripper on one of these Shareholder Expresses might have seen Mr Corbyn, sprawled out on the lobby floor with his stuff around him, and reasonably wondered if in fact he had passed out from the stench of Branson's predatory capitalism.

How ironic that this was on what was once the last publicly owned, very well run and profitable state railway service, East Coast. This was popular and efficient so consequently was to be temptingly easy meat for a predatory combo headed by the private island-dwelling magnate. How chompingly easily they grabbed it a couple of years ago as the Lib Dems and Tories had a fire-sale of the few remaining state assets.

So, as Mr Branson luxuriates on the shores of his sun-kissed, private tropical island, issuing missives to take Corbyn down, spare a thought for the real truth that is being betrayed. And that is that, with public subsidies now more than double what they were, in real terms, when the railways were in public hands, whether he was on the floor or in a seat, Jeremy Corbyn spoke the truth. 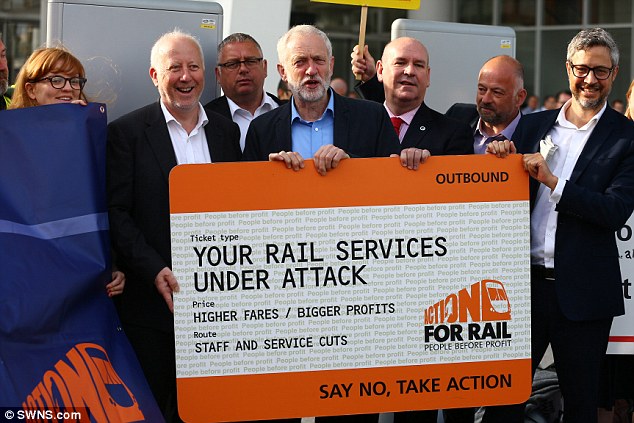