War of the First Resort 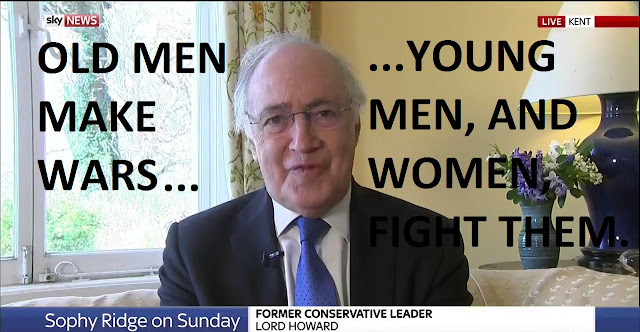 The quote is attributed rightly or wrongly to Einstein, but it came to mind this morning with the news of the ludicrous harrumphing of Tory Lord Howard, former party leader, on the subject of the British enclave of Gibraltar's place in the Brexit negotiations.

Showing all the insecurity of a playground bully faced with having to talk on equal terms with someone else, Howard dismissed Spain's wish to be involved in the talks on the creation of a new "hard border" on its southern frontier with a ridiculous over the top threat to go to war.

“Thirty-five years ago this week, another woman prime minister sent a task force halfway across the world to defend the freedom of another small group of British people against another Spanish-speaking country, and I’m absolutely certain that our current prime minister will show the same resolve in standing by the people of Gibraltar,” Howard told Sky News.

The Government did not comment directly on his words, but it is clearly an orchestrated move: Defence Secretary Fallon took the opportunity to say the UK will "protect" Gibraltar come what may, while Downing Street announced the PM had spoken to her Spanish counterpart to stress Britain's support for Gibraltar.

The colony on the tip of the Spanish peninsula is a relic of our imperial past: conquered from the Habsburgs at the end of the War of the Spanish Succession in 1713, it is a large rocky promontory of just 2.6 square miles that has served ever since as a major naval base. Along its precipitous clifftops, a tiny statelet has grown with a population of some 30,000 people governed by their own legislature with powers similar to the Scottish Parliament. Defence and foreign affairs, including with the EU, are handled by the UK Government. Its economy is centred on online gambling, tourism, shipping and financial services.

And while two referenda have made clear Gibraltarians wish to not be part of Spain itself, they voted by 96% to just 4% last year to remain part of the European Union. As part of the UK, however, Gibraltar will be due to Brexit along with the rest of Britain. Mrs May, however, forgot to include the colony in the notice to leave the UK, so this mini-crisis is perhaps predicated on the concept of the "dead cat" defence. This is where politicians hide their mistakes in plain sight by creating a diversion. So, in this case, his Lordship has turned the issue of omitting the territory from the Brexit notice by coming up with a completely non-existent threat to Gibraltar's sovereignty of a level meriting a declaration of war.

With who is not clear - Spain for sure, but maybe the whole of the rest of the EU as well? And, as we would be attacking a member of NATO, all our previous NATO allies would be duty-bound to support Spain. So, especially with UK armed services somewhat reduced by Tory austerity, our military will have their work cut out.

Of course, it won't, or at least shouldn't, happen - while Spain has retained its demands for the return of the Rock ever since Britain seized it three hundred and four years ago, its actual demands at the moment are for an agreement on Gibraltar's post-Brexit status. At the moment, thousands of Spaniards and Gibraltarians travel across the border every day for work, social and other activities. It is hardly surprising that, like Eire, Spain may want to have some say in how a new "hard border" on its southern land mass might function.

It rather makes sense for the people of Gibraltar too. It is notable that in the Sunday Times today, the local legislature has briefed that it has no concerns about its sovereignty, but rather  IS worried about the Government not including them in its application for talks on the future relationship with the European Union and, by default, with its Spanish neighbour.

But the rhetoric remains deeply troubling. In just a matter of weeks, the Trump Administration has excelled at leaping to hostile pronouncements towards other countries with explicit and implicit threats of violence. The fact that the UK Government now pathetically invokes the spectre of the Falklands War, and even the battle of Trafalgar, when it hasn't even begun talking to anyone is worrying indeed.

What will happen when there really is a crisis or serious dispute? The Remainer warnings about a European Continent once again open to the bloody wars that marked so much of its pre-Treaty of Rome history suddenly seem not quite so far-fetched. Turning Clausewitz on his head, it seems the regimes in London and Washington perhaps see politics as a means of warfare and rather willingly so.

But of course, if and when "we" go to war, Mrs May and Mr Fallon will not actually be at war. Young men and women of our armed services and their counterparts from whatever armies we take on will be doing that, and killing and dying by the scores and hundreds, or more. And Lord Howard will be able to toast the steadfast resolve of his successors with another brandy in the comfort and safety of his armchair. Through his blood-tinted spectacles, it's not so difficult to be brave with other people's lives.

"He felt a kind of hatred for these two old mandarins who knew so many dates and theories, but hadn't the least idea of the stench of a sacked town or the look of an open belly full of fat, green flies over which poppies droop their heads."
(from Conquered City by Victor Serge)
Posted by Viridis Lumen at 13:33 2 comments