Piers & Greggs: Or how to flog pastries with an entirely accidental food fight

For the last few days, Twitter has been clogged up with sausage rolls - these being of the vegan type, developed in time for Veganuary 2019 by the High Street bakery chain Greggs.

Reflecting the growing interest in vegetarian and vegan lifestyles both for personal health and to challenge the more damaging effects of the mass meat industry on the environment, Greggs launched their new product with a fairly bog standard release of a video showing a long tubular shaped item filled with meat-free gunk rather than its more traditional gunk-with-meat "delicacy". 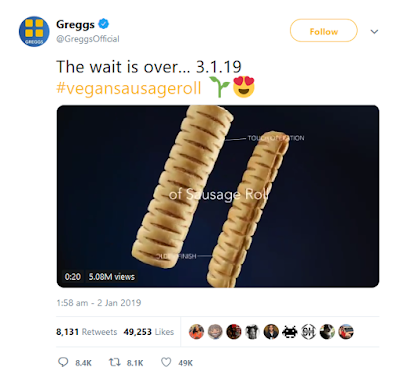 So far so corporately normal. But barely a couple of hours after the shops opened to flog the animal-free miracle food, there came a tweet by the louche "commentator" Piers Morgan as he played to the gallery with customary rightwing rudeness. 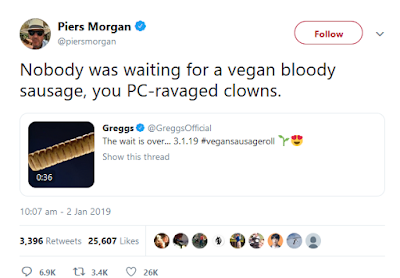 This was apparently very humorous indeed, almost hilarious in fact, because it channelled the iconic cool of James Bond (although ironically using the words of a villain as opposed to the bow-tied hero) and this gave the roll the traction to truly get rolling.

Vegans, vegetarians, greens and then the utterly massive demographic of everyone and anyone who can't stand the GMB presenter and former Mirror editor got chomping down to their local outlet to sample the apparent quantum breakthrough in healthy, sustainable eating. Though it has to be noted they first made a point of retweeting the Greggs' response nearly 20,000 times, granting it 146,000 likes and viewing the video over 5 million times. Some made their own videos, fulminating against Morgan, and even the Green Party co-leader tweeted a photo of himself sitting next to their white and blue corporate logo, eating one and promising to eat even more!

By the next morning, the national print media had picked it up and the Morgan-Greggs bun fight was headline news and even today a poorly attended anti-Brexit gathering in Manchester was confused for an anti-vegan roll protest when the police kettled it outside a local Greggs. 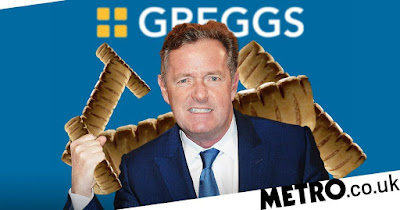 So Piers Morgan NIL, VeGreggans ONE!

In the world of Public Relations, everything is greasepaint.

Did Piers Morgan really wake up on Wednesday and decide to pour his wrath on Greggs over a vegan roll? He may or may not like a pie, but does he actually follow their account, scanning it anxiously of a morning as self-appointed sentinnel for carnivores? Was he motivated to troll Greggs after becoming riddled with guilt for failing to challenge the vegan sausage roll when it was trailed on his own programme a few days earlier? And equally, did the person running Greggs social media account really spontaneously think up an allegedly witty response to his verbal assault on pastry-correctness-gone-mad?

Well, maybe. Though it turns out that Greggs and Morgan share more than passionate tweets about vegan rolls.

When challenged, TH responded, on Twitter of course, that "Yes we do regular work for the good folk Greggs and a while back promoted Piers book - but yesterday's launch was handled by the in house team."

Is that an actual denial of involvement? Was the handling of "the launch" by the inhouse team anything to do with the twitter-storm between Greggs and Morgan? After all, surely a spontaneous spat with Piers Pieman was not part of the launch plan - was it?

But whatever, how fortunate - what could be better, entirely accidental, publicity for both of them than this little quarrel? Piers reinforces his image as a caped conservative melting snowflakes faster than a bakery hotplate, while Greggs pose as heroes of inclusivity and get to flog their mass-produced fast-food to people who wouldn't previously have even considered darkening their doorways.

The PR press has been ecstatic over the whole episode. PR Week has lauded it as "a PR masterclass" with ecstatic reviews from industry insiders on the sheer savvy sausageness of it all.

Yeah, yeah, yeah...
In a world of confected products and confected "debate", that is possibly, maybe, allegedly the truest statement of the whole episode.


Script extract from "The Ploughman's Lunch", a 1985 film written by Ian McEwan and directed by Richard Eyre: