I know since the story broke in the USA about the white woman who claimed to be black there has been a global debate about societal categorisation and the limits to self-designation. To what extent can you declare yourself to be something others may not believe is valid?

Well, whatever the merits or demerits of the US cases, I've decided to try it for myself here in the UK.

So, from next month, I am self-designating as a multi-millionaire.

I'm not, as such, a multi-millionaire, but why should that matter - don't judge me!

So time for me to enjoy the opportunity to:

(a) not pay my taxes

(b) get away with not paying my taxes

(c) be thanked for not paying my taxes

(d) be encouraged to not pay tax in the future

(e) continue to receive the same, or even better, public services as the "little people" who pay tax (c) Leona Helmsley 1989

No matter my skills, or lack of them, or crass stupidity, I can expect to be fawned upon, listened to, offered stuff and excused for all sorts of anti-social behaviour and callousness.


Breakfast will be brilliant!

And I won't need to rush out to work afterwards - because other people will be doing that for me! My people!

I'll also not have to carry cash or pay for services from people who should be glad to merely imagine I am trickling down upon them.

I'll certainly be taking the trickle. 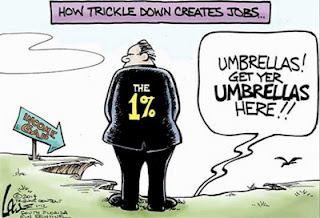 As for the rest of you... tighten your belts and stay at home on Saturday.

The TransAtlantic Trade & Investment Partnership plans for a massive free trade area between the European Union and the USA reach a critical stage next week with a vote in the European Parliament. Negotiated in secret, with MEPs having to go pre-booked into a special room to quickly read updates on the talks, the treat masquerades as a wealth-expanding, job-creating measure. In truth, it delivers what is left of democracy and public services into the hands of profit-seeking multinational corporations, unaccountable to anyone and disinterested in anything other than the company's bottom line. The environment, the people who work for these companies, the people who buy from them and the communities they live in - what protections they have now will be either stripped away outright or whittled away by a process of attrition in the years to come.

Few free trade schemes have worked to the genuine, lasting benefit of the populations they cover - and this one is no exception. It will reduce public income from taxes by reducing and removing tariffs on imports; it will push governments to privatise public services, including the NHS in Britain, and open up those that do not to endless, costly law suits from companies seeking compensation for denial of profits in secret courts through the Investor-State Dispute Settlement (ISDS). US tobacco giant Philip Morris has just invoked similar free trade rules to sue the British Government for billions of pounds in compensation for plans to force cigarettes to be sold in plain packets - just a taste of what is to come if TTIP is adopted.

It is also likely to have a big impact by forcing down European standards on public safety, employment rights and consumer protection to the much lower US standards so that it is "fair" to big companies - no thought to European (or American) workers or consumers. Everything from safety protection in the workplace to food standards and mobile phone tariffs could be affected to the disadvantage of ordinary people.

In the European Parliament, and at Westminster, Conservatives, Lib Dems and most Labour politicians have signed up to the TTIP. Opposition has mainly come from the Green Party and, in the EU, its allies in the Greens/EFA, which includes SNP and Plaid Cymru, as well as from the Nordic Green Left. UKIP have been absent from most debates on it - they tend to favour free trade agreements in most circumstances though they may dislike this one purely because of its connections to the EU. 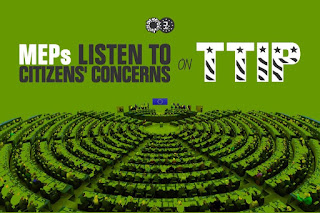 Millions of Europeans and Americans have been working to oppose TTIP, with international days of action in recent months and many previous demonstrations. Trade unions, including the AFL-CIO in the USA, have been vocal in their concerns. However, with the negotiations going on in secret and the Governments of nearly all member states signed up to the mantra that all trade is good trade, only the members of the European Parliament are likely to be able to put any block on its passage.

This week may be our last chance to stop this dangerous and potentially irreversible treaty. Green MEPs including England's Molly Scott Cato and Jean Lambert have produced a series of short videos outlining why TTIP matters and why we should be concerned.

If you agree,
- please share the videos (click through to Youtube on each video for the share button)
- please sign the petition on this link HERE (it is now close to the two million signature mark)
- and please write/email/contact your MEPs - details HERE

If you are on Facebook, take a look at Big Bad Law, a Green page taking a slightly satirical but urgent swipe at the TTIP.