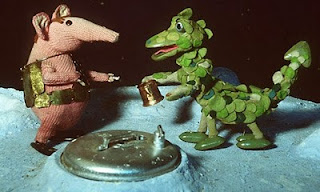 The sad news today that Oliver Postgate, creator of children's programmes from my childhood, like Bagpuss, Noggin the Nog and the Clangers, has passed away at the age of 83 was trailed with lots of people understandably reminiscing about the Soup Dragon, baby Clanger, and the Welsh train Ivor the Engine. I need to confess not being a big Bagpuss fan - though my wife was and is - I was more a Clangers-guy. Probably to do with them being in outer space and the journey to the soup dragon, and some of the alien visitors (like the Iron Chicken and the Sky-Moos) they had on planet Clanger, were just a tad mysterious, enough to grab my young attention. More than this, his were some of the first children's programmes to respect their audience, no matter how young, as being human beings in their own right with all the complex emotions and potential that brings - the characters consequently had a wider range of psychological depth and more challenging storylines than many contemporaries.

But one thing that wasn't mentioned among the tributes to this gentle, mildly eccentric, creative man was how he chose to use his wealth in later years - for he didn't only bring pleasure to millions of kids in the past; he also worried deeply about the future of our world for millions of today's kids and the kids not yet born.

Oliver Postgate donated money to environmental causes, including taking out full page adverts in national newspapers at his own expense, to highlight the climate crisis - and to point out how the Stern report was flawed by using out of date information which significantly underplayed the impact and pace of global warming. And if he wasn't entirely sound on French maternity rights, he did at least care enough about the environment, nuclear weapons and the Middle east wars to put his money where his mouth was:

Oliver was a conscientious objector in the second world war, spending three months in prison as a result. He came from a radical family background - his grandfather was George Lansbury, Labour Party leader from 1932 to 1935, while other relatives were prominent in the old Communist Party. Although not party political himself, Oliver was involved with CND in the 1970s and 1980s. Like all good children's stories, many of his had messages for adults as well - including social justice when the mice went on strike and the wrecking of traditional industry when the dragons were retired owing to financial cutbacks and the introduction of new technology.

Oliver was a friend of children and a friend of our planet; he cared about a future he knew he would never see. So, Oliver, rest-in-peace, and may your eternal soup in Clanger Heaven be as rich and warm as the feelings you leave behind in millions of hearts.