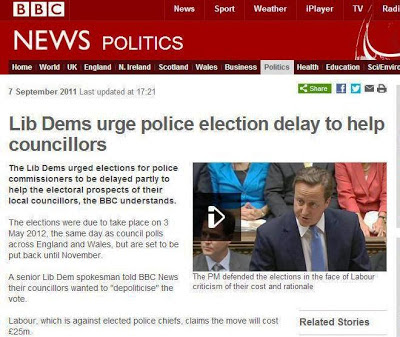 And so the Police & Crime Commissioners elections roar into the record books: as the ones with the lowest turnout in modern British history. With less than 15% of the electorate voting - and one polling station in Wales having a remarkable turnout of precisely zero - the validity of the entire process has fallen into question. Record numbers of spolit papers - many deliberately so - have turned up as the citizens of England and Wales give, in effect, a decisive thumbs down to the whole farcical process.

Over £100 million of taxpayers' money has been wasted on holding this exercise in the middle of November - totally out of time with the normal voting cycle in early winter, in the dark. An additional £25 million was wasted on moving it from the original plan of coinciding with the local elections in May.

So who is responsible for this mess? Who has wasted taxpayers money and a lot of people's time? And left us with the policing system in a total mess with Commissioners formally elected but without any mandate or legitimacy at all?

Yes, that one - whose Lib Dem Party sunk into fifth place behind UKIP and the English Democrats in Nick's own home territory of South Yorkshire, only just keeping their deposit. As brazen as ever, the Lib Dems pushed and pushed for these elections to be held in mid-November rather than the previously agreed time of May when their costs could have been reduced and (whatever your view about the posts themselves) more voters would have participated.

Quite simply, though laughably, they thought this would help them hold seats at the council elections As the BBC trailed a year ago, Lib Dem high command thought that if the police elections were held in May, they would both distract Lib Dem efforts to hold onto council seats contested at the same time and buoy up the Tory vote by creating a focus on law and order.

So, after confronting David Cameron with threats to vote down the Police & Social Responsibility Bill if he did not concede on the timetable, the Lib Dems achieved the change and, in spite of the additional £25 millions in  costs, the vote was moved to yesterday. At the time, they claimed it was an altruistic move to depoliticise the elections, but a BBC investigation found otherwise - and unlike the recent Newsnight farago, no one denied this one's findings. And besides, the refusal to provide a freepost facility as normal with this level of election effectively removed the chance for independents to seriously participate unless they were wealthy - leading in fact to very highly politicised elections.

It is therefore touchingly and wonderfully ironic that the Lib Dems' results have been relentlessly pisspoor - not only did they fail to field candidates in half the country, but where they did they were frequently beaten out of sight. With most results in, their national vote total barely reaches 7% and they have been overtaken by UKIP even although that party was also only standing in half the contests.

Clegg and his party have a lot to answer for - and a big bill to pay.