Proud to Pay Their Taxes

A curious item pops up on social media this evening - an anti-Scottish independence group called "Proud to be Scots, Proud to be United" offers "volunteers" £25 to help out at events, plus £10 towards travel costs.

"Right guys for anyone that wants a quick buck we are now paying volunteers £25 to help out at events. Its very easy work (just giving out car stickers to those who want them) Let me know if you are interested!" says Jack.

It's an odd thing and you just sort of hope that these respectable adherents of the union are not getting themselves into a fluster as they try to buy their help. So a few gentle words of advice to them. No suggestion at all that they haven't already sorted all this out, but it is a potentially complicated area, so just as a wee reminder of the pitfalls of paying "volunteers"...

1. "Paying volunteers". Erm, not really - paid volunteers are more commonly known as "staff" or "employees". And while I am sure neoliberal Unionists are quite keen to do things like abolish taxes altogether and have unlimited labour from folk for £25, when you pay someone like this, it is pretty advisable to have a clear, written agreement about their employed or self-employed status, including any liability for tax and who pays it.

At £6.31 per hour, I reckon four hours or so of shouting against Wee 'Eck for 25 quid and you're right on the borders of British law (sorry folks). Unless of course you are using folk under 21 or, even better, kids under 18 - you can pay them less and get more out of them in the finest tradition of British fair play. And let's face it, with Britain the third most unequal society on the face of the Earth, these youngsters need to get used to grinding poverty if the Union continues, so they may as well start now.


3. Expenses - you can pay towards or even all of volunteers' travel expenses. But only if they are real. If someone spends £5 getting there and you give them £10, sorry but that's a payment, not an expense. Tax, tax, tax. (yes, I know...)

4. Benefits - do remember to advise your volunteers that if they accept payments for work done, it may affect their benefits. At times like this, you really need to ask, what would Ian D-S do? After all, he's on record suggesting that £25 for a few leaflets and you are set up for the next three days and a fourth one, up until about lunchtime. We don't want the Union being campaigned for by people in breach of social security rules, however inadvertently, now do we?

5. Declare to the Electoral Commission - I'm not fully au fait with the finance rules of the referendum, but if they haven't already, it would be a good idea to check about declaring these costs. It is a public vote and campaign. Any expenditure incurred needs to be accounted for usually. Even if its paying people to do stuff most other campaigns, charities, churches, sports groups, coffee mornings, etc don't pay for - because their volunteers work for free doing stuff they believe in.

Yes. All in all, it's quite complicated once you start paying people to work for you. Of course, give the Westminster mafia another few years with "benefits reform" and welfare to work, and I am sure it will get a lot easier to bung folks some cash and get them to do whatever you need for a total pittance. But in the meantime, the last thing we need is for some bunch of progressives to come along and point out that there are pesky, bureaucratic rules and red tape preventing the sort of entrepreneurship that wants to save the Union. 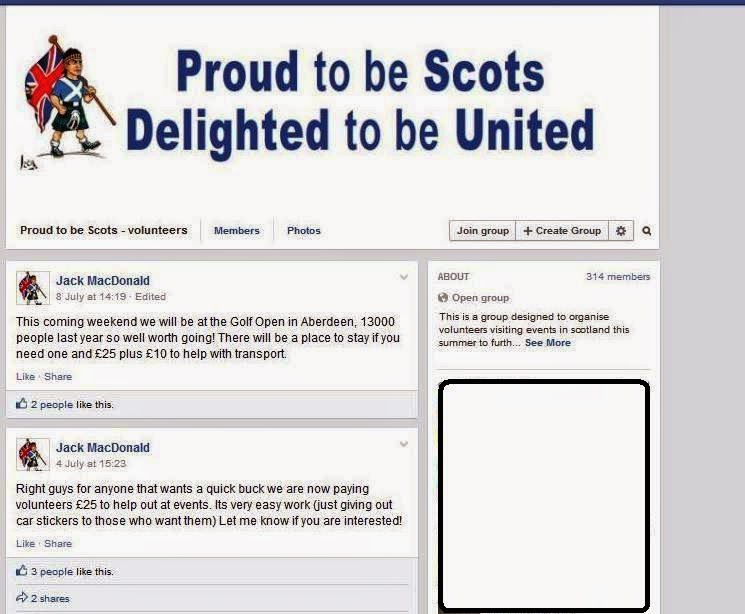