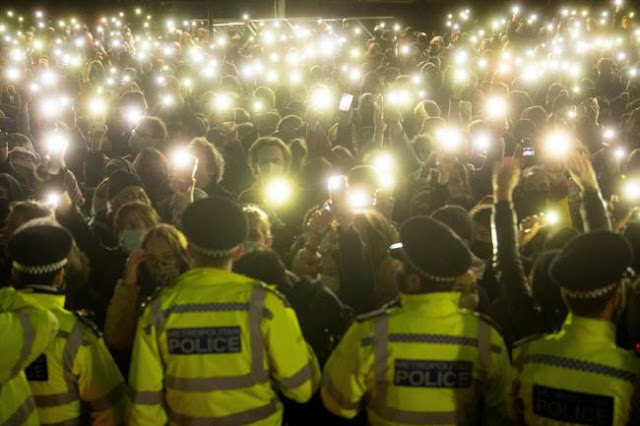 If we needed any more proof of the Government's inherent illiberalism, and the range of prejudice and bigotry that accompanies it, the last week has surely provided a surfeit. The awful murder of Sarah Everard was a shocking example of how, allegedly, the mere impression of acting on state authority can be misused to appalling ends.

Yet the response of Boris Johnson and Home Secretary Priti Patel has been to seize the moment to propagandise and push through even stronger laws to control and squash the citizenry - literally hours after the terrifying image of a 5foot2 woman thrown to the ground and cuffed face down by police as they broke up the vigil for Sarah on Clapham Common, one of the last places she passed through alive. The apparent circumstances of her murder prompted women and men to come to remember her and to "reclaim the night", just as women did decades ago when Peter Sutcliffe's killings in Yorkshire led to the authorities telling women not to go out alone, a suggestion echoed in the wake of this latest murder. The same authorities had the option of allowing an organised, socially distanced gathering, but chose instead to deploy public health rules to forcibly break up the spontaneous one that took place anyway.

In as tone deaf an example of misogyny as you could get, the Government's proposed initiative to protect women now is to deploy large numbers of undercover police to trawl post-lockdown pubs and clubs to identify and supposedly detain potential rapists and murderers. With the endorsement of Opposition Leader Keir Starmer, the alleged misdeeds of one police officer will apparently be solved by having more police officers mixing secretly with the public.

Except we know how that has gone in the past. Police spies infiltrated a wide range of peaceful groups, particularly in the environmental movement but also trade unions, race justice groups and others pursuing perfectly legal aims.

Supposedly to remain undercover, some of them developed relationships with women activists, living with them and even fathering children before disappearing. Some acted as agents provocateurs, initiating others to commit often trivial offences but offences nevertheless that got them criminal records and were used by the state to tighten legislation against its opponents. One case, highlighted repeatedly by Green Party MP Caroline Lucas using parliamentary privilege, allegedly involved a police officer setting off a bomb outside a department store in order to frame an animal rights activist.

In this new paradigm, how far will undercover duties involve officers mingling in night clubs acting "in role"? What potential is there for abuse of position and power to do quite the opposite to protection? Rather than acting to counter the cultural objectification of women, it seems more a very conscious misrepresentation of a terrible event to enable an ever-creeping interference in normal social life and activities.

Yet this same week's Policing bill uses precisely the zeitgeist of peaceful activism as a national secruity threat to enact the most draconian legislation in our history - now past its second reading in the Commons, the new laws as they stand will make it illegal to protest too loudly, or to "cause annoyance" to even one person. If you commit such an appalling excess, you can face ten years in jail.

The legislation is clearly pitched at environmental protests such as Extinction Rebellion - demonised by a former police officer's report for the rightwing Policy Exchange thinktank in 2019 and listed as an extremist ideology by Counter-Terrorist police a few months later. Also in sight are initiatives like the Black Lives Matter protests last summer and many of the anti-fracking protests that spiked the attempts to destroy swathes of the English countryside in the entirely unnecessary search for shale gas. While most fracking is now cancelled or on indefinite hold, the Tories' funders have long and unforgiving memories and a long backstory has been created all the way back to David Cameron's Coalition era pledge to crackdown on "non-violent extremism".

Be too different (travelling communities will now be required to have special identity cards), or too radical and it doesn't matter how pacific or law abiding you are, you are still an annoyance - a decade in the clink beckons.

Attack a woman, of course, is a different matter. Almost simultaneously to passing the policing legislation, the Government turned down a range of proposals to make it easier to protect women facing domestic violence and to turn misogyny into a hate crime, although a very recent concession will involve recording gender and sex-based crimes where these are judged to be factors. In a blatant lie, the ill-titled Safeguarding Minister appeared on TV to claim that hate legislation is "mainly for minority groups" and  as women are the majority, it couldn't apply to them.

Never in the field of British politics have so many been misled so much by the guardians of the few. To paraphrase that Tory icon, Winston Churchill.

Unlike women, though, this much "white"-washed character, with his very mixed legacy of wartime leadership, anti-Indian racism and sexist jibes about women's faces, is carefully protected: deface Churchill's statue, or those of any of 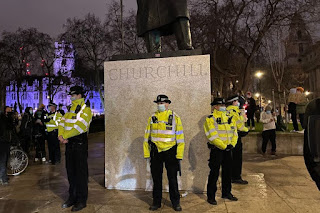 the slave traders and mercantilist thieves that grace our cities, and a special place awaits you in Patel Hell. For, it seems, these lumps of Victorian marble that stare down silently on largely disinterested people, who barely give them a passing glance, are integral parts of our national culture. And the snowflake fascists can't bear the idea of anyone disrespecting them by doing something like drawing attention to the historical facts of their icons' lives and deeds - leading to a police guard being set around Churchill's image near Scotland Yard this week, just in case.

It seems that when the Left disagree vocally with something, such as Rees Mogg speaking at a university or an AltRight candidate speculating about raping a Labour MP, this is "political correctness gone mad" and "cancel culture" - even although the perpetrators are pretty free to carry on sounding off as much as they like: witness the oaf Piers Morgan's tantrum when he was criticised by a weather presenter over his highly personalised attack on Meghan Markle last week. He chose to walk, but no one made him. No one actually shut him up - someone simply disagreed with his pompous bombast.

But now, block a road with a demonstration, shout too loudly or spoil someone's enjoyment of their day by warning about climate catastrophe, or campaigning about racism - or remembering a murdered woman...  and the freedom-loving Tories will lock you up for the next decade. The same people who wax lyrical, tearfully even, about the Magna Carta and mythical English rights to avoid wearing face masks during a deadly pandemic will incarcerate those who offend or annoy them. Cancel culture deluxe.

So we face what so many of us have long feared and warned about - post-purple wave, the Conservatives are no longer small state advocates, but rather Big Statists. Not the sort who want to use the state to better lives, or at least not the lives of all. Instead, they are seizing and deploying state power to embed themselves and their friends and funders into the ownership of the nation.

The market system, bad though it was, is decaying, replaced not with the common good, but instead with the rise of  the nobility of Varoufakis' "techno-feudalism". This is now a place where an Etonian chumocracy acquires the state and its authority to preserve and extend their writ indefinitely, and where  the last serious socialist challenge to its ascendancy is demonised into a hate-filled totem of fear and loathing; Jeremy Corbyn channelled as the Emmanuel Goldstein of the 21st century.

A place where the future is a boot - a copper's boot - stamping on the face of change, the face of hope. Forever.

And yet, thousands commemorated Sarah Everard around the country; thousands turned up outside Parliament to oppose the new legislation. And hundreds of thousands joined the BLM protests and XR actions. You can kill the canary if you like, but the fires are still burning - our species and our planet are at severe risk; people still demand justice - for racial minorities, for the female majority and for all society. No politician can legislate these truths away.

And we won't let them. 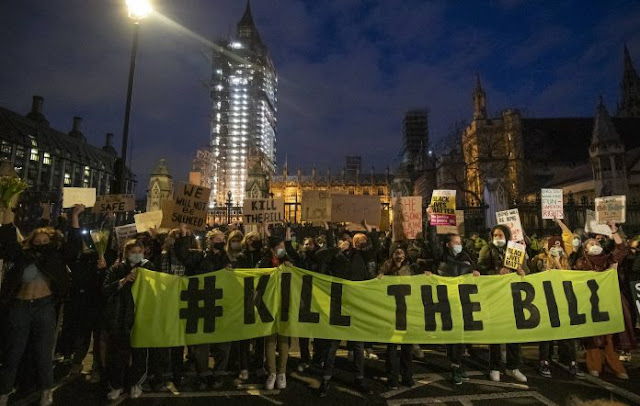