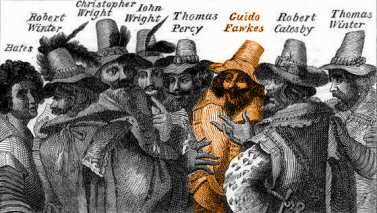 Today, 5th November, is Bonfire Night in Britain. This is our form of what, in many countries, is a fire festival – like Norwuz, the pre-Islamic new year festival marked in Iran by a remarkably similar combination of bonfires and fireworks. But in Britain, as we burn the “Guy”, whilst most know that the man it symbolises, Guido Fawkes, attempted to blow up both the King and Parliament in 1605, less is known about the circumstances that led him to do this – and some of the similarities to today.

Britain did not exist at the time, although by the Union ofthe Crowns of 1603, England and Scotland shared a monarch. James Stewart, the sixth of Scotland and first of England, had travelled to London from Edinburgh after inheriting the English throne from Elizabeth Tudor – his second cousin and the executioner of his mother, the Catholic Mary Stewart, Queen of Scots. James shared with Elizabeth a deep distrust of Catholicism, viewed as a threat to the sovereignty of both their kingdoms as it was the faith professed by their major Continental enemies - the Hapsburg Empire (Austria, Spain and the Spanish Netherlands) and France.

Consequently, Catholics in Elizabethan and early Stewart England had a far from happy time – Elizabeth's father Henry VIII had seized Catholic assets and declared himself the head of the established church, a position held to this day by the monarch. Opposition to the Anglican Church therefore was soon viewed on a par with opposition to the King and, as such, treason. Catholicism was outlawed; the Catholic church’s assets were seized and disbursed between the King and his followers; and priests were hunted down and killed. Their followers, real and simply suspected (or even maliciously accused) were subject to detention, torture, trial and execution.

It was against this background that Guido Fawkes and a number of co-conspirators vainly plotted to place barrels of gunpowder under the Houses of Parliament and explode it with the King and his Parliamentarians during the State Opening of 1605. Unfortunately for them, they were discovered, seized, tortured and executed - not, as one might assume, by burning, but by the equally grotesque spectacle of being hanged, drawn and quartered.

Fawkes can therefore be viewed as either a terrorist or a freedom fighter depending on your point of view. Given that he and his fellow Catholics could be seized and executed by the State purely for holding their beliefs, the logic that says people can fight against tyranny - whether in the Arab Spring or the Warsaw Uprising or on the beaches of Normandy - would seem to apply to the conspirators as they dragged their barrels of powder into Westminster's cellars.

Certainly, in the last few years, the caricature of Fawkes has assumed symbolism as the "face" of opposition to the new tyranny that has swept so many western countries in recent years. Never as free or democratic as we have liked to claim, Britain and the USA in particular have introduced sweeping new laws following the 9/11 atrocities, supposedly to protect freedom, but in truth placing it increasingly at risk. Centuries of legal norms, such as habeas corpus and the right to trial by jury, have been removed or jeopardised as never before - with electronic surveillance massively increasing the power of the authorities to track and trace their opponents.

Of course, Bush and Blair, the main authors of these new measures, claimed that they were necessary to counter the grossly exaggerated claims of international terror networks supposedly threatening our way of life  apparently more seriously than the Nazis or the Soviet Union ever did. And so we have the twisted irony of having our freedoms removed supposedly to protect them!

Consider just a handful of the disgraceful actions that the new laws have allowed so far:
- the imprisonment, without trial, for years of hundreds of men, including several children like Mohammed al Gorani, in Guantanamo bay, many seized on the basis of allegations from extremely dubious single sources.

- the detention without trial of a number of people in Britain who were never allowed to know what they were even suspected of let alone see the evidence against them: none have been brought to trial and several are being held/restricted at the request of semi-dictatorial Arab regimes such as Algeria.

- the use of evidence obtained under torture: the USA especially, including under Obama, has "outsourced" torture to allied regimes, including Assad's Syria and Gaddafi's Libya so that they can claim not to carry it out themselves - this more than anything else has been the main factor behind the wave of anti-US protests across the Arab world.

- domestically, in the UK, supposedly anti-terror laws have been in the main used to detain environmentalist activists and prevent them from taking part in demonstrations. The same laws led to the prosecution of a peace campaigner, Maya Evans, for reading out aloud the names of British servicemen and women killed in Afghanistan and Iraq in front of the national cenotaph in Whitehall, while in an earlier case a Labour Party member - a survivor of a Nazi concentration camp - was arrested and held for several hours for booing the then Home Secretary.

- in both the USA and UK, and recently in Greece, anti-government protests have been faced with increasingly brutal responses: from the kettling of a heavily pregnant woman in freezing weather in a London disability protest, to the pepper spraying of an elderly woman by US police or the use of a chained young woman as a human shield by Athenian riot cops, the level of violence deployed by the state against its opponents in supposedly free societies is growing and growing fast.

- the bizarre detention of the Green Party Presidential and Vice-Presidential candidates, Jill Stein and Cheri Honkala, by the police during the second Obama/Romney debate, when they were taken to a large facility, strapped to chairs and held incommunicado for eight hours.

More routine law was used last week to prosecute successfully a Glasgow man who shouted "no public spending cuts" at poor sensitive Prime Minister David Cameron. Meanwhile, the supposed civil rights champion, Liberal leader Nick Clegg, is pushing ahead with plans to create an electronic database that will store the records of every phone call, text message, email and internet visit by every citizen of the UK. Both the potential and likely actual abuse are massive - quite aside from the risk of hacking of such a goldmine of personal information by third parties.

Nothing puts our rights at risk more than our surrendering them to an ever more powerful state. From Magna Carta onwards, we have fought for our rights and freedoms: millions sacrificed their lives the struggles for them over centuries. To quietly acquiesce to the corrupt, overweening would-be tyrants of the modern governments that claim to foster and defend democracy by destroying it would be a betrayal of them and of ourselves. It recalls the cynical words of Lenin - that "Liberty is precious; so precious that it must be rationed." As soon as any Government is permitted to use even a smidgen of such logic, then the very nostrums that supposedly set us apart from the dictators, tyrants and ideologues who would oppress us are shredded and gone.

And so, Guido Fawkes, by some accounts the last man to enter Parliament with honest intentions, symbolises now the face of resistance to oppression and tyranny of the state over individual belief. His mask has been adopted by many in last year's Occupy movements around the world, as well as by the Anonymous  meme inspired by the movie V for Vendetta, which took the trends of post-9/11 to their possible conclusion of a deeply oppressive police state. Like the oppression of Bush, Blair and their successors (Obama has prosecuted more whistle-blowers than Bush), the state in V for Vendetta justifies its restrictive policies in the name of defending the safety of the people. And yet, as with post-9/11, where the awful deaths of 4,000 have led to wars that have killed over 2,500,000 more, any real ongoing threat is small set against the disproportionate reaction. And bad people with bad intent use the moment to assume ever greater power to force through their real agendas - against environmentalists, liberals and socialists, ultimately in the name of the Big Money corporates who reap so much from perpetual war. 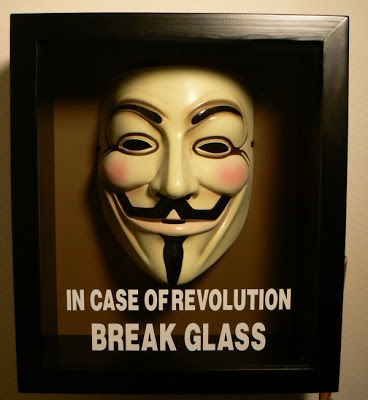 No one can stop them, apart from us. However difficult it may seem, how overweening their authority - no Government, no system has any more power then we let it have over us, than we surrender to it. From Prague's Wenceslas Square in 1989, to Tahrir Square last year, or Times Square last week, ordinary people can make the difference - but only by acting together.

And so, as the fires burn tonight and rockets soar into the sky, the finale of V for Vendetta comes so appropriately to mind, and the words of Natalie Portman's character, Evey, when she is asked who V was:
"He was my father and my mother, my brother and my friend. He was you, and me....He was all of us."